The island of Cytherea 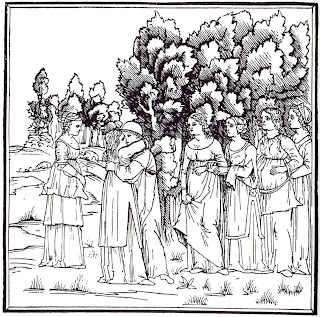 The strange and beautiful Hypnerotomachia Poliphili, published by Aldus Manutius in Venice in December 1499 and written by the monk Francesco Colonna (if we are to believe an acrostic formed by the first letters of each chapter), narrates the dream journey of Poliphilo and his quest to gain the love of Polia.  As Joscelyn Godwin writes in the introduction to his translation - the first complete one in English, completed to mark the book's 500th anniversary - Poliphilo's name indicates that he is a lover of many things, including architecture, gardens and sculpture.  'He has a passion for rich, colourful fabrics, especially when they are worn by nymphs; he revels in music, pageantry, ritual, and any other spectacle that induces a heightened state of consciousness.  ... When Poliphilo stands agape before the stupendous buildings of Antiquity, he seems to enjoy the same state of arousal as when he voyages to Cytherea in the company of Cupid, Polia and six exquisitely seductive sailor-nymphs.  At every opportunity he indulges in enumeration of detail that one might call fetishistic when he applies it to clothing or footwear, but which is no less obsessive when the object is an elaborate fountain or an emblematic obelisk.  This polymorphous eroticism is what gives the Hypnerotomachia its intensity and its atmosphere, saturated with the desire to gaze, to taste, and to consume.' 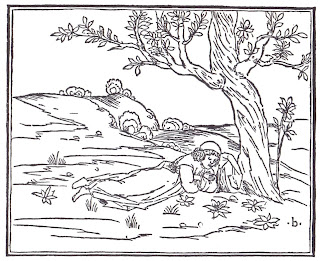 The dream begins at dawn with Poliphilo wandering, lost, on a broad silent plain, after a sleepless night lamenting his unrequited love.  In these early pages of the book, the landscapes he encounters are natural but empty of people - it is only once he has emerged from a maze of dark tunnels into a pleasant country of fruitful fields that he meets five nymphs who bathe him and take him to their Queen.  In this locus amoenus there is a sense of perfection and exquisite artifice in everything, including two remarkable gardens - one made of glass, the other of silk.  When he is eventually ready to be taken to the island of Cytherea (a journey that might be compared to that taken in Edgar Allan Poe's 'The Domain of Arnheim' which I described recently) he finds a shore 'washed by friendly tides and pebbled with strewn gemstones that shone in various forms and colours.  There was also abundant evidence of the fragrant coitus of monstrous whales, brought up by the fruitful tides.'  This is 'no place for mountains or deserts; all unevenness had been eliminated'  It is a perfect circle, three miles round, with an outer ring containing twenty groves of trees and inner rings featuring a succession of meadows, knot gardens, emblem gardens and finally an arena containing the fountain of Venus.  The book's ekphrastic descriptions and line drawings of topiary, statuary and buildings had a wide influnce on the design and planting of formal gardens in subsequent years, from the canals and colonnades of Versailles to the Villa d'Este's fountain of the sleeping nymph. 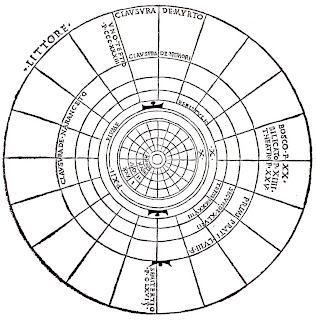 Although the Hypnerotomachia Poliphili imagines a pristine classical world, it contains within it a few poignant reminders of the ruins and fragments that were all that remained of the temples and monuments of antiquity.  Waiting for the arrival of Lord Cupid's 'speedy hexireme' and their embarkation for Cytherea, Polia and Poliphilo contemplate an ancient building, built upon the 'wave-resounding shore of the ebbing sea.  What remained of it was a great ruin of walls and enclosures, structures of white marble, and nearby a broken and sea-dashed mole of the nearby harbour.  In the fissures thereof I saw growing the salt-loving littoral cock's-crest, in some places ox-eye, much saltwort and the fragrant sea-wormwood, and on the sandbanks iringo, purslane, sea-colewort and other well-known simples, characias and myrtites.'  They sit on the grass talking, but gradually Poliphilo starts to feel a pleasurable heat as he gazes at her tightly fitting shoes - 'fine instruments for disturbing one's life and for the excessive torment of a heart aflame' -  and then at her 'dazzling bosom and delicious breast, where two rounded apples stood forth, resisting their clothing and striving obstinately against it.'  It is Polia who rescues the situation by suggesting that he go off and explore the ruins: "take your pleasure in looking at these, and examine the noble fragments that remain, which are worthy of our admiration.  And I will wait for you, contentedly sitting in this place, watching for the arrival of our Lord, who shall take us to his mother's holy and desirable realm." 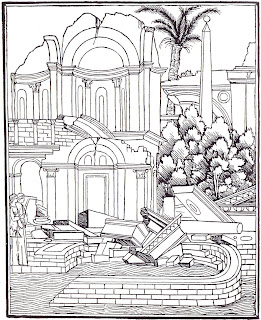 Big thanks to Diana for the corrigendum - now fixed.