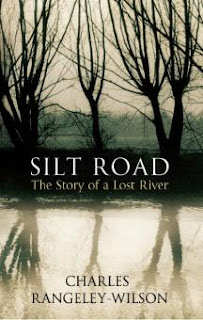 Having mentioned Silt last week, I come now to Silt Road, a new book kindly sent me by Charles Rangeley-Wilson.  It is 'The Story of a Lost River', the River Wye: not the 'sylvan Wye' celebrated by Wordsworth, but a nine mile tributary of the Thames that used to flow through High Wycombe until it was built over as part of a road widening scheme.  The book has historical digressions on water meadows, chalk geology, the Swing Riots and the Hellfire Club, but there's a pervading sense of melancholy, as the author trudges through winter rain and sits alone in a public library, looking at old maps and trying to trace the history of the river's imprisonment.  At one particularly low ebb he dreams of a dead fish, prompting recollections of happier times fishing for trout in Tasmania. Angling has been the subject of Charles Rangeley-Wilson's two previous books, Somewhere Else and The Accidental Angler and it is no surprise to see that he will be appearing on the new Caught by the River stage at this year's Field Day festival.  The same event will also have Melissa Harrison reading from her novel Clay (she has just reviewed Silt Road in The FT), plus a session dedicated to field recording that features some of the people I mentioned here recently (along with DJ and fellow Stoke Newington resident, Jonny Trunk).  It's good to see Caught by the River going from strength to strength - having begun as a site dedicated to the riverine enthusiasms of the team behind Heavenly Records it has now become essential reading for anyone interested in British nature writing and field recording.
Posted by Plinius at 3:55 pm