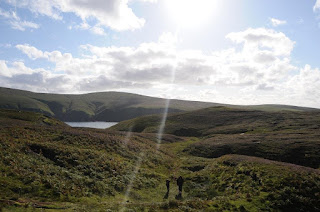 On the Shetland island of Unst

Before our summer holiday in the Shetland Islands I tried to do some background reading in Shetland's poetry, using the new anthology edited by Kevin MacNeil, These Islands, We Sing.  It includes over twenty poets who have written about Shetland, from Hugh MacDiarmid, who lived at Sudheim ("Sodom") on the island of Whalsay in the thirties, to contemporary writers like Jen Hadfield, winner of the 2008 T. S. Eliot prize.  The poet whose words greet the visitor on the walls of Sumburgh Airport and the Shetland Museum is T. A. Robertson (1909-73), who wrote as Vagaland, the old Norse name for the islands.  There are only two of his poems in the anthology: 'Water-lilies' and 'Kwarna farna?' which means 'Where are you going?' in Norn, the language spoken in the islands until the eighteenth century.  You can read and hear the latter on the Shetland fir Wirds site: it begins with the poet looking out to the shimmer on the sea and listening to the sound of sunken rocks off the coast near Sandness, but it ends reflecting on rural depopulation - 'noo da laand is bare'. 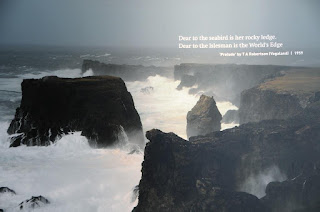 Vagaland quote in the Shetland Museum

We did not make a point of visiting places mentioned in these poems, although we did drive one misty day through the uninhabited moorland to Sandness.  It is a place that will be familiar to anyone who has read Robert Alan Jamieson's Nort Atlantik Drift: Shetlandic poems with translations and introductions in English, accompanied by atmospheric black and white photographs.  Sadly his website http://www.robertalanjamieson.info/ which had downloads of the poems seems no longer to exist.  In contrast to poets like Vagaland, he writes with Scandinavian vowels, as can be seen in the first lines of 'Konstint Starn': 'Simmirdin kam doon aboot da Niep / an up abøn da krug a'Æshnis, / lyght læ owir da nortland læk a hap.' (Summer's dim came down about the cliffs, and up above the crouching body of Eshaness, light lay over the northland like a shawl).' 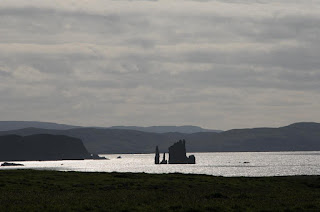 Looking out to sea from the Stevenson lighthouse at Eshaness we were barely able to stand up, the wind was so strong.  I thought then of the poem 'Flans Frae da Haaf' by Laurence Graham: flans are gusts of wind and da haaf is the deep sea beyond coastal waters. Writers in Shetlandic can draw on a rich vocabulary to describe landscape and the effects of weather, as Raman Mundair found on moving to the islands, where she composed 'Stories from the Shoormal': "Shoormal is a lovely word.  It's the meeting point of the sea and the shore." A British version of the Home Ground project to collect and celebrate the language of landscape will need to include many of these Norn words: voe (a sea inlet), ayre (a beach), mool (a headland), scord (a fissure in the skyline of a hill), noost (a hollow place where a boat can be drawn up) and gloup (a blowhole behind a cliff face, derived from Old Norse glup, throat).  It is perhaps surprising that Hugh MacDiarmid didn't make more use of the rich vocabulary on his doorstep, a fact Michael Schmidt has sought to explain (in his '40 Tea Chests' essay) with a nice landscape metaphor.  The Shetland Islands' dialect 'did not, as it were, plug into the larger world upon which he focused; rather like a sea pool, it cupped its flora and fauna beyond the tide of history.' 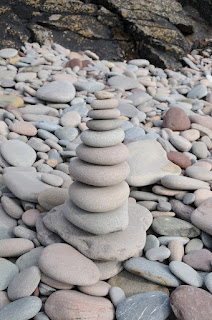 MacDiarmid does use 'the old Norn words' in one poem, 'On a Raised Beach', turning to them after trying to convey the essence of the stones on the beach in English: 'ratchel, striae, relationships of tesserae, / innumerable shades of grey, / innumerable shapes, / And beneath them all a stupendous unity.'  There is a memorable ecopoetic statement in this poem: 'we must reconcile ourselves to the stones, / Not the stones to us.'  And, as Louisa Gairn points out in 'MacDiarmid and Ecology', there is a Heideggerian distinction between the 'thing-for-us' and the 'thing-in-itself' when MacDiarmid writes 'there are plenty of ruined buildings in the world but no ruined stones.'  Mark Ryan Smith, another of the poets included in These Islands, We Sing, sees 'On a Raised Beach' as one of the most impressive poems of Shetland: not often considered as such, 'but you have to ask yourself if it could have been written about anywhere but the beach on Linga where MacDiarmid visited.'  The uninhabited island of Linga is described in an essay, 'Life in the Shetlands' that MacDiarmid published in 1934, and I'll end this post with a description of his first night there...

'There are no trees in the Shetlands, so it was impossible to find any sheltered spot on the surface of the island to lie in; and there is no bracken or long grass, so it was impossible to gather anything to make any sort of bed on my ledge of rock.  A little earlier on it should have been possible to read in the open until well after midnight; indeed there is practically no night.  But by this time the long night of the summer-time had given way to the opposite conditions where there is a very short day.  I had brought with me a volume of Rilke's poems and Theodora Bosanquet's little book on Paul Valéry; but I did not open either of them.  I was too busy; lying for the most part on that rocky ledge with the sound of the sea in my ears and the darkness of the cave (broken only by the yellow flashing of innumerable matches and the red glow of my lit pipe) grateful to my eyes, doing nothing - but what I intended to do, which was sufficiently engrossing to keep me from being lonely or conscious very much of either cold or hunger; for I am a poet myself, or think I am, which explains the whole thing.' 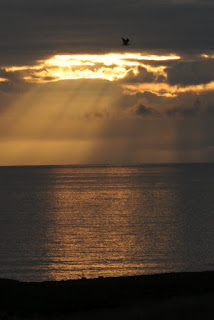 Gardener in the Distance said...

Thankyou, Plinius; this is really nice.