Before the Kingsland Road 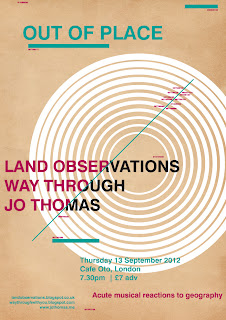 Walking down the Kingsland Road last night towards the quadrivium that is Dalston Junction, I was following the route of the old Roman Road that ran north from Londinium to Eboracum via Lindum Colonia. I had come to hear Land Observations, the new project by James Brooks: a sequence of meditative guitar instrumentals collected as Roman Roads IV-XI.  This was part of an event called 'Out of Place' that also included Jo Thomas performing Nature of Habit and the pastoral punk duo Way Through whose songs 'walk the streets of market towns, wait forever at bus stops and lose themselves in edgelands.'  The Land Observations set opened with 'Before the Kingsland Road', which Ben Graham in an excellent review for The Quietus describes as 'motorik at a walking pace, a thrumming bass line anchoring single note specks of radiant guitar that pick out the sights as we go by; forward in motion, backward in time, the past superimposed on the present'.  Each journey - 'Via Flaminia', 'Appian Way', 'Aurelian Way' - begins with a signature loop that runs on through the track whilst fragile tunes emerge and disappear like fragments of Roman architecture.  'It's as much about walking as anything else,' Brooks says in an interview about the project, and as I walked home through the night I thought of the confusion of roads under my feet and the long, straight Roman ideal - in Alice Oswald's phrase, 'a road's road to ride in a dream'.

Interesting ideas and I loved the music. Thanks for posting it.

Thanks. You can download the album from Boomkat who describe it as "exploring the kind of gorgeous windswept instrumentals last heard on records by State River Widening and Corker Conboy."