Sounding out the Territory

Last night I was at Cafe Oto for The Wire Salon and a discussion of sound mapping, featuring artist Kathy Hinde, academic Joseph Kohlmaier and Ian Rawes of the London Sound Survey.  Of course the notion of mapping sounds pre-dates the internet; R. Murray Schafer's book The Soundscape (1977) for example contains an isobel map of Stanley Park in Vancouver and a sound event map of downtown Boston. But the internet has given rise to a new form of interactive visual map, offering sound clips uploaded and linked to the locations where they were recorded. These maps won't help you find your way, they are designed to take you on a mental journey and often include visual and written documentation as well.  The mapping aspect may even seem superfluous - Ian Rawes started his collection of London field recordings as a lists of sound files.  To some extent, he suggested last night, maps are simply a nice way of organising material, like the London Sound Survey's map of waterway sounds.  And yet another of his maps is entirely visual: derived from field recordings evenly spaced across the city, it simply records variations in the acoustic environment diagrammatically.  It is the kind of map Shafer designed, albeit with more of a sense of humour: the Richmond Park square consists entirely of aircraft sound and 'bloody parakeet squawking noise'. 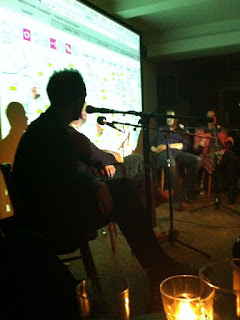 Yesterday evening began with a quiz (much easier than you'd have thought given that this was a Wire event!) and the purpose of this was partly to prompt thoughts about the representativeness and authenticity of the sound clips you find on the internet.  Would the audience guess that the muezzin chant was recorded in Whitechapel?  (Yes we all did, but the point was made).  Ian Rawes had a similar example, recording an outdoor Caribbean religious service on Canvey Island, a landscape normally associated with oil refineries and the sound of Dr Feelgood.  He thinks that field recordists are generally better than photographers at restraining themselves from trying to 'improve' their material ("you don't get people recording Tibetan monks and then adding reverb").  Modest about his own ambitions, he nevertheless feels that sound maps have a distinct role, and referred to the Hudson Mohawk Sound Gate Spiral Map which combines high quality sound and video recordings in order to demonstrate the limitations of the fixed point of view in a visual experience of landscape.  The website's creators remind us that 'sound waves bend round objects that would easily filter out light' and, in contrast to the visual field, our ears give us '360 degrees of aural perception in all directions at once.' 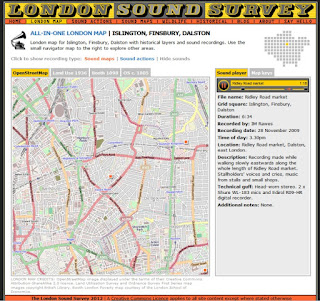 Whilst the London Sound Survey collects untreated recordings and includes proper documentation (see above), most of the field recordings used in the landscape related-sound art and music I've written about here will have been altered in some way.  Digital sound, like digital imagery, is a sequence of data, rather than a physical trace, and can be manipulated to provide access to otherwise inaudible phenomena like insect sounds or seismic processes (slowed down or sped up to last as long as our attention span).  But the process of sonification can go further, converting maps themselves into sounds, and allowing us to listen in to the ebb and flow of information.  It offers the prospect of hearing the slow or silent processes - economic, social, technological - altering what might otherwise seem be static landscapes.  And it can give us access to places beyond our reach - one of the quiz sound clips was a sonification of data plotting the movement of Saturn.  I was hoping it might sound like Sun Ra, and no doubt it would be possible to design an algorithm to achieve this: the possibilities are endless and there is clearly a risk of creating a misleading separation between sign and signified.  This was certainly brought home to everyone in the audience last night when Joseph Kohlmaier raised the possibility that if you played the sounds of a sonified universe long enough you might get to hear a speech by David Cameron...
Posted by Plinius at 12:51 pm