The location of a Great Malady On Wednesday I managed to have a quick first look at 'The Robinson Institute', Patrick Keiller's new exhibition for the Duveen Galleries at Tate Britain.  It is based on his film Robinson in Ruins, which I mentioned here two years ago after seeing some preview footage and a roundtable discussion with Keiller and his collaborators: Doreen Massey, Patrick Wright and Matthew Flintham.  You can see footage of a similar discussion at the BFI site, and what they say there is equally applicable to the exhibition.  Keiller contrasts our sense of displacement and mobility with nostalgic concepts of settlement; Massey questions the natural state of markets and asks that instead of thinking about belonging to a landscape, we ask to whom the landscape belongs; Wright argues that ruins are not the product of neglect but are actively created; and Flintham describes the saturation of military sites and the impact of symbols of military power.  On this last point, I wonder how the visitor numbers will compare to Fiona Banner's installation of two fighter jets in the same space last year, which became the UK's most visited exhibition (proving according to Florence Waters in the Telegraph, 'that many of us agree with Charles Moore's terrifying observation in this newspaper's review of the show: that killing machines are objects of great beauty').

The exhibition includes stills and footage from Robinson in Ruins along with related books and artifacts, and art chosen by Keiller from the Tate's collection.  It is almost like a blog in physical form, although a blog's chronological sequence is what orders Robinson's observations in the film; here the images and objects are grouped thematically.  The review by Adrian Searle includes a description of the exhibits visible in the photograph I took below and it gives a good impression of how the exhibition is structured. 'Lumpen black bronze sculptures by Lucio Fontana and by Hubert Dalwood, squat on the floor below a giant full stop painted by John Latham. Each was made within a year or so of each other, around 1960, and all have an air of finality. Little wonder – nearby, in a vitrine, is a copy of the agreement between the UK and the US for the sale of the Polaris nuclear missile, and across the way Quatermass II, a movie based on Nigel Kneale's clunky but still frightening sci-fi thriller, runs on a monitor. A shiny but slightly menacing 1967 sculpture by Kneale's brother Bryan Kneale glowers on the floor nearby. Coming across cloud studies by Alexander Cozens and John Constable, you expect to see rockets slewing through their skies, and below an LS Lowry industrial townscape hangs an Ed Ruscha pastel, emblazoned with the phrase: mad scientist. There's a lot that's mad here. But it's the world, not the art that's crazy.' 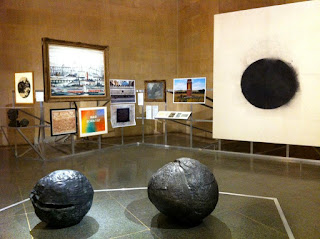 Robinson in Ruins begins with a memorable line from Frederic Jameson: "It seems to be easier for us today to imagine the thoroughgoing deterioration of the earth and of nature than the breakdown of late capitalism; perhaps that is due to some weakness in our imaginations."  Robinson, armed with a notebook and an ancient cine camera, is in a car park in Oxford.  "He surveyed the centre of the island on which he was shipwrecked: ‘the location,’ he wrote, ‘of a Great Malady, that I shall dispel, in the manner of Turner, by making picturesque views, on journeys to sites of scientific and historic interest."  These views are, filmed (according to Brian Dillon) in 'Keiller's customarily austere but rapt visual style – though in this case, as suits a film partly about the persistence of pastoral in the face of rapacious land grabs, the shots are longer. The camera tarries with fields of oil seed rape, nodding foxgloves and shivering primroses until they start to look monstrous, every bit as alien as the relics of 19th-century architecture and décor that so exercised the surrealists. Before Keiller's (or Robinson's) prophetic gaze, the English countryside is a monument to itself, and ripe for revolutionary appropriation.'  Interviewed about this new installation at Tate Britain, Keiller says “I think what is most urgently required to address the economic/environmental crisis is the political will to do so, followed by a certain amount of forward planning. Neither is much in evidence. But art, especially landscape art, has a key role. Henri Lefebvre wrote that ‘to change life we must first change space’. Art can do this.”
Posted by Plinius at 10:58 am

Email ThisBlogThis!Share to TwitterShare to FacebookShare to Pinterest
Labels: psychogeography

More reviews are appearing over the weekend, and the Guardian's article by Owen Hatherley is well worth reading.

He says: 'Keiller is not to be compared to Iain Sinclair, WG Sebald or Will Self. His work since 1997 is far closer to Humphrey Jennings's montage of annotated industrial images Pandaemonium, or even Walter Benjamin's Arcades Project, a counter-history of the 19th century told via fragments on Parisian shopping arcades. Like these, Keiller's work is a collision of historical materialism, modernism and surrealism, politically militant and aesthetically defamiliarising.'

I can see what he means, but it does feel as if Robinson is getting more Sebaldian with each film. We are told in Robinson Ruins that he arrived in England from Berlin in 1966, the same year Sebald left Germany to come to Manchester.