The Rialto Bridge from the Riva del Vin 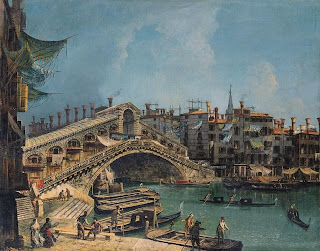 The National Gallery's recent exhibition 'Venice: Canaletto and his Rivals' set the works of Canaletto alongside other Venetian painters like Luca Carlevarjis, whose choice of views and festivals at the start of the eighteenth century were a model for the later artists, Bernardo Bellotto, Canaletto's nephew who left to work at the courts of northern Europe (I included one of his views of Warsaw in an earlier post), and Francesco Guardi, whose poetic vision of the city looks forward to Turner.  Perhaps unsurprisingly given the theatricality of Venice, three of the artists in the exhibition began as scene painters: Canaletto himself, his early rival Michele Marieschi, and Antonio Joli.  Canaletto's father was a scene painter and so was his brother.  At this time the trade was often passed to the next generation and the Galli-Bibiena family, who were designing theatrical sets around Europe throughout the eighteenth century, can be seen to have influenced some of Marieschi's compositions.  Antonio Joli worked in the theatre at Modena and Perugia before coming to Venice.  He later visited England, decorating the house of John James Heidegger, director of the King's Theater at Haymarket and a renowned producer of Venetian-style masquerades.

The National Gallery podcast recently had a brief interview with theatrical historian Julie Dashwood on the influence of theatre design on Venetian view paintings.  She discusses perspective, lighting and framing before the interviewer turns to one of Joli's paintings showing the Doge’s Palace, Campanile and St Mark’s Square seen from the waters of the Bacino di San Marco.  "This surely can’t have anything to do with set designs? I mean ships and boats and the rest of it, can it?" "It can," replies Dashwood.  "The Renaissance stage - and in this the baroque stage is not a break, it’s a continuity of what happened in the Renaissance - they loved special effects. And they loved being able to create the effect of water and rain on stage and bringing in all kinds of machines. They had cloud machines – you can see the clouds here.  ... Of course Joli is able to bring it all into one painting and he creates a sort of stage ... the darkened auditorium if you like is on one side and the real action, the big-wigs, the grandees are coming in to play up their parts on the water, which is their stage, and then going into the city, which is their stage."
Posted by Plinius at 3:29 pm