In his collection Slow Air (2002) Robin Robertson talks in a poem called 'The Larches of Zernikow' about lines of trees planted by children before the war.  Even in October, the poet says, you would not realise, walking among them, that their yellow gold is branding the forest canopy with the sign of a swastika.  Robertson's endnote for the poem explains that the trees were planted 'under the direction of forester Walter Schmidt as a tribute to the 1000-year Reich.  Known locally as the Hakenkreuzschonung - the Swastika Plantation - it was not discovered until 1992 after an aerial survey of the region.  The trees were felled, but the stumps could not be removed.' 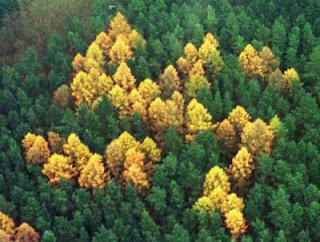 The story of the larches at Zernikow was told ten years ago by Imre Karacs in an Independent article. He explains that one local legend put the plantation's creation down to the inadequacy of the local Hitler oak (Hitler, like Bismarck, had oaks planted in his honour). 'Zernikow had not actually planted a Hitler oak, merely christened its biggest tree in honour of the Führer. According to this story, an official turned up in early 1938, demanding to know what plans were in place for Hitler's birthday. "We already have a Hitler oak," the locals said, proudly pointing to the venerable token of their esteem. "It will not do," the official screamed. "You must have something new." And so Forester Schmidt walked to an empty field to the north of the village, and proclaimed that on this spot should stand an eternal tribute to the 1,000-year Reich...'  Another legend involved 'a farmhand sacked from the estate for "perversion", after being caught in the cowshed with his trousers down', who got his revenge by denouncing the estate manager August Wehr to the Gestapo.  Wehr's friend and employer, the squire Hans von Wedel, then came under suspicion and so 'to placate the authorities Forester Schmidt set about planting the biggest swastika of the region. The squire escaped.'

A quick surf on this topic brought me to Beachcombing's Bizarre History Blog where I learned of another example of Fascist tree planting. 'In a surfeit of Mussolini madness in 1939 – no-one would have bothered two years later – the forestry school from nearby Cittaducale planted pines on the mountain side above the town in the shape of the letters D-U-X. Dux is, of course, the Latin for ‘leader’ (from which English gets duke) and a calque and more easily written version of the Italian DUCE, Mussolini’s preferred name among his supporters. The letters remain a much-loved local landmark and it seems that many Antrodocans were irritated when recently some provincial-level politicians tried to get rid of the offending letters.'
Posted by Plinius at 8:44 am

I recently went to Felbrigg Hall in Norfolk and saw this sign about a Victory V plantation.