A cliff so white it stood like frozen air

Andrew Young (1885-1971) isn't a household name but you often come upon his work in collections of nature poetry.  Geoffrey Grigson, for example, was an admirer and I think I first encountered 'A. J. Young' (as he called himself early in his career) in one of Grigson's anthologies.  I remember a particular line - 'a cliff so white / It stood like frozen air'.

Young should be an ideal poet for me, writing about Sussex and other familiar landscapes in vivid short poems that he made as concise as possible. Sometimes his poems seem as simple as nature, but there are times when his insistent rhythms and well-worn vocabulary are off-putting - 'The Swans', for example, begins 'How lovely are these swans, / That float like high proud galleons', and 'The Roman Wall' starts 'Though moss and lichen crawl / These square set stones still keep their serried ranks.' But read through the Carcanet Selected Poems and you end up making allowances for lines like 'owls in drowsy wisdom sit' and concentrate on the images that take you directly to the landscape: 'ivy trickling in green waterfalls', or 'rain-buds' in the mist, or thistledown - 'ghosts of day ... silver against blue sky'. 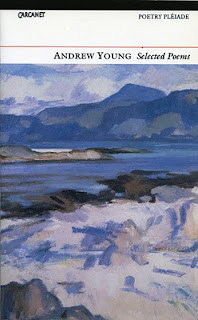 The book's contents pages read in places like an exhibition of eighteenth century landscape paintings - 'Prospect of a Mountain', 'The Ruined Chapel', 'The Falls of Glomach'.  Young's poems also include rustic scenes - 'Ploughing in Mist', 'Snow Harvest' and 'The Shepherd's Hut' (which begins, like a painting, with a dab of colour: 'The smear of blue peat smoke / That staggered on the wind and broke...').  He obviously appreciated the English landscape tradition and in 'Winter Morning' refers directly to it, conflating art and nature - 'the hill a picture of a hill', like a painting 'by Cotman or Old Crome'.  One could make a link too with his neo-Romantic contemporaries - a site dedicated to Young makes connections with Paul Nash.  The Carcanet anthology includes illustrations alongside the poems - woodcuts that Joan Hassall made for Young's Collected Poems in 1950.

I should point out that many of Young's nature poems focus on details - stones, dunes, daisies, pine trees, swallows, frogs, haystacks.  But a lot of them describe the experience of places and the thoughts prompted by views seen on the poet's walks.  From among his Selected Poems, here are some of these Andrew Young landscapes:
This is, by my reckoning, the 499th post on this blog.  My 500th will be a special extended post on Peter Lanyon, artist and glider pilot.
Posted by Plinius at 4:04 pm

Email ThisBlogThis!Share to TwitterShare to FacebookShare to Pinterest
Location: Stonegate, where Young was vicar