We know that naturalism is a style like any other - Gombrich's Art and Illusion goes to some lengths demonstrating this in the case of Constable's apparently simple, realistic painting of Wivenhoe Park.  For photographers and film makers the landscape imprints itself more directly, but they still decide where to point the camera.  Chris Welsby's 1972 film Wind Vane, however, partly dispenses with this artistic control by allowing the wind to decide the frame at any given moment, using a kind of sail device.  The photo below shows how this was done, suggesting that to get close to a landscape-generated landscape film requires quite an elaborate artistic set-up. 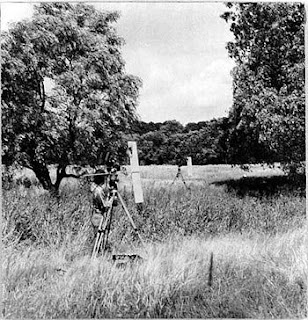 The film is described on Chris Welsby's excellent website. 'The location for this film is the western end of Hampstead Heath in London. Two cameras mounted on tripods with wind vane attachments were positioned about 50 feet apart along an axis of 45 degrees to the direction of the wind. Both cameras were free to pan through 360 degrees in the horizontal plane. There are three continuous 100 foot takes for each screen. The movements of the two cameras, which were filming simultaneously, were controlled by the wind strength and direction. The sound was recorded synchronously with the picture track and consists mainly of wind noise. Each screen has its own soundtrack when projected.'

For me the most interesting thing about this film is the way the two cameras register the passing wind - both move in response to it but one follows slightly later than the other, giving a sense of the wind's movement across the Heath.  In an article called 'Blowin' in the Wind', Fred Camper describes another film in which the wind is integral to the filming process: Tree (1974): 'Welsby tied his camera to a tree branch during a strong wind; he'd planned an 11-minute film, but the camera malfunctioned and the usable portion was 4 minutes. The wobbles of the frame as the branch moves dominate the movements of grass and branches within the frame: the viewer becomes profoundly aware of how much the act of framing conveys dominance and control though here the agent is the wind.' 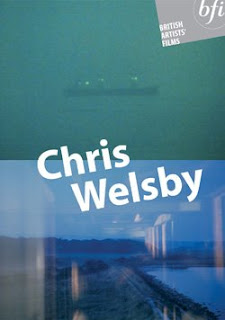 The BFI have released a DVD of Chris Welsby's films in the same series as the William Raban collection I described last month.  It includes his collaboration with Raban, River Yar (1972), Drift 'a study of winter light falling on the surface of water, metal and cloud', and (for me the most effective film) Sky Light - 'an idyllic river flows through a forest, flashes of light and colour threaten to erase the image, bursts of short wave radio and static invade the tranquillity of the natural sound.' The films should be viewed on bigger screens than our little TV, but I think the DVD is well worth watching to get a sense of Welsby's progress from early films like Wind Vane to recent installations like Lost Lake.  (I can't speak for the DVD's 20 page booklet which sounds good but was missing in the copy I borrowed from our local video shop.)


To conclude, here is how Chris Welsby views his work as a landscape artist, quoted from the introduction to his website: 'unlike the landscape painters and photographers of the nineteenth century, I have avoided the objective view point implicit in panoramic vistas or depictions of homogeneous pictorial space. I have instead concentrated on 'close up' detail and the more transient aspects of the landscape, using the flickering, luminous characteristics of the film and video mediums, and their respective technologies, to suggest both the beauty and fragility of the natural world. The process of re-presenting the landscape in either the single screen works or the installations is not seen to be separate from nature or in any way objective, but is viewed instead, as part of a more symbiotic model in which technology and nature are both viewed as inter-related parts of a larger gestalt.'
Posted by Plinius at 4:36 pm