Undoubtedly one of the best books I've ever read on landscape is Marjorie Hope Nicolson's Mountain Gloom and Mountain Glory (1959).  Here is a brief extract in which she cites Thomas Hobbes as an example of the tendency to denigrate mountain scenery, writing at a time when mountains were still viewed with distaste or fear.

'In 1636 the still unknown tutor of the youthful William Cavendish, later second Earl of Devonshire, set himself the task of celebrating the district in which his patron lived, and Thomas Hobbes - who considered himself at this time a man of letters rather than a philosopher - produced a poem, De Mirabilibus Pecci Carmen.  Hobbes was quite at home at Chatsworth.  He had also traveled abroad with his pupil.  He had experienced dangers of travel compared with which the Derbyshire Highlands were only child's play.  Certainly he could not really have felt the fear and distaste he expressed in his poem, but was obviously describing the scenery about Chatsworth as Latin tradition dictated.

Although the De Mirabilibus Pecci Carmen may offer some material to a reader interested in manifestations of semiscientific curiosity, the student of literature is likely to remember it rather because Hobbes, when he attempted to be a poet, left behind him one of the worst examples of "metaphysical" grotesquerie:

Behind a ruin'd mountain does appear
Swelling into two parts, which turgent are
As when we bend our bodies to the ground,
The buttocks amply sticking out are found.

Such was the mountain poetry of the philosopher who was to give new direction to aesthetics and literary criticism.'

Here is the title page from the 1678 edition, which included Hobbes' Latin and an English translation by 'a person of quality'.  Note the reference to 'the Devil's Arse'. 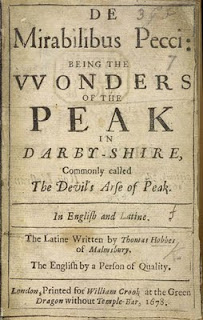 The Devil's Arse is the name of Peak Cavern, next to the village of Castleton. Therefore the document wasn't relating to the whole Peak District