I spent a happy evening with a friend yesterday eating Il Bacio pizzas and watching the BFI's DVD compilation of William Raban films.  It includes his 66 minute long documentary Thames Film (1986), which flows from the city of London to the mouth of the river and ends with the incredible science fiction landscape of the Thames estuary seaforts.  The film was partly inspired by T.S. Eliot and includes lines from Four Quartets read by the poet.  The inclusion of poetry like this is familiar from other landscape and city documentaries - Terence Davies' Of Time and the City (2008) is just one recent example.  More striking, I think, is Raban's clever use of Breughel's painting The Triumph of Death which the camera pans over (in a manner reminiscent of Tarkovsky in Solaris) at several points in the film, revealing a series of links between the river's dark past and Breughel's apocalyptic vision. 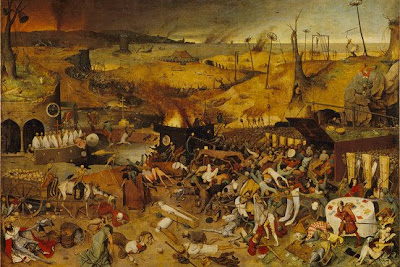 Pieter Breughel the Elder, The Triumph of Death, c1562

Peter Ackroyd (inevitably) is an admirer of Thames Film and you can read his essay at the Luxonline site for William Raban.  He says, for example, that it is 'in many respects it is a visionary film. There are moments of light and colour that lift the spirit with exaltation. There are giant shapes and structures that fill the mind with awe. There are passages of mist and turbulence that recall the primaeval Thames of swamps and marshes. The multifold images of the river run through this film like the currents and tides of the water itself. It is a film, in every sense, of great fluency. The sounds, as well as the images, of the river are of great importance. There is a continual clangour, a loud lament, with the sound of machinery fighting against the lap of the water and the cry of the seagulls.' 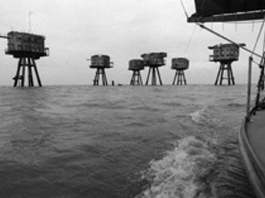 William Raban has been making landscape films since Sky (1970) and River Yar (1971-72 a collaboration with Chris Welsby).  He says 'the first films I made were extensions to my work as a painter. The paintings involved taking impressions from natural surfaces like waves and tree bark. For the 'Tree Print' series canvas was left installed on tree trunks for long periods to weather and discolour. The films made at this time had a similar naturalistic approach towards documenting changes, and were mostly static views of landscapes where various 'time-lapse' systems were used to make slow movements like the rise and drop of tide levels and development of cloud patterns clearly perceptible.'

In the wake of these early experimental works, he has, in addition to Thames Film, made a sequence of films that have charted the changing face of London and its river: 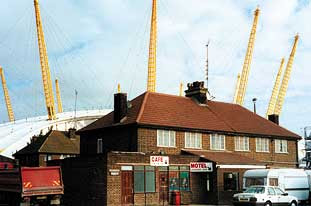 The Millenium Dome, from MM
Posted by Plinius at 6:41 pm

Could whoever it is that keeps trying to add spam to this particular post please stop! It is never going to be published - I just reject it every time.