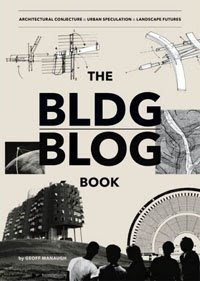 Geoff Manaugh was in London today to launch the BLDGBLOG book, so I popped over to the Architectural Association this evening to hear him give an entertaining whistle-stop tour of its contents. It had been a day of strange weather with a massive downpour earlier, like something out of the book's 'Redesigning the Sky' chapter (aggressive cloud seeding during the Vietnam War). The book is fascinating and beautiful to look at, with a lot of on landscapes and soundscapes. Some of the people I've discussed here before crop up - Simon Norfolk, Christian Bök, W.G. Sebald, J. G. Ballard (of course). So here are Ten More Reasons to read the book (in addition to those given on the BLDGBLOG site) - examples of the book's 'architectural conjecture :: urban speculation :: landscape futures'.