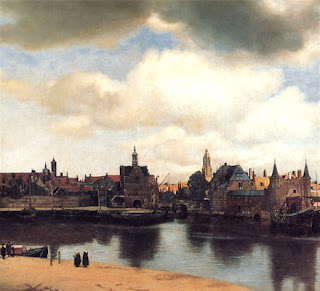 Last week I saw the most beautiful painting in the world, according to Proust. Vermeer's View of Delft is in the Mauritshuis, opposite the Girl with the Pearl Earring, the 'Dutch Mona Lisa', which was surrounded by onlookers like the Mona Lisa itself. The View of Delft also seemed popular but nobody looked sufficiently moved to expire in the manner of Proust's character, the writer Bergotte:


'The circumstances of his death were as follows. A fairly mild attack of uraemia had led to his being ordered to rest. But, an art critic having written somewhere that in Vermeer's View of Delft (lent by the Gallery at The Hague for an exhibition of Dutch painting), a picture which he adored and imagined that he knew by heart, a little patch of yellow wall (which he could not remember) was so well painted that it was, if one looked at it by itself, like some priceless specimen of Chinese art, of a beauty that was sufficient in itself, Bergotte ate a few potatoes, left the house, and went to the exhibition. At the first few steps he had to climb, he was overcome by an attack of dizziness. He walked past several pictures and was struck by the aridity and pointlessness of such an artificial kind of art, which was greatly inferior to the sunshine of a windswept Venetian palazzo, or of an ordinary house by the sea. At last he came to the Vermeer which he remembered as more striking, more different from anything else he knew, but in which, thanks to the critic's article, he noticed for the first time some small figures in blue, that the sand was pink, and, finally, the precious substance of the tiny patch of yellow wall. His dizziness increased; he fixed his gaze, like a child upon a yellow butterfly that it wants to catch, on the precious patch of wall. "That's how I ought to have written," he said. "My last books are too dry, I ought to have gone over them with a few layers of colour, made my language precious in itself, like this little patch of yellow wall." Meanwhile he was not unconscious of the gravity of his condition. In a celestial pair of scales there appeared to him, weighing down one of the pans, his own life, while the other contained the little patch of wall so beautifully painted in yellow. He felt that he had rashly sacrificed the former for the latter. "All the same," he said to himself, "I shouldn't like to be the headline news of this exhibition for the evening papers." He repeated to himself: "Little patch of yellow wall, with a sloping roof, little patch of yellow wall." Meanwhile he sank down on to a circular settee whereupon he suddenly ceased to think that his life was in jeopardy and, reverting to his natural optimism, told himself: "It's nothing, merely a touch of indigestion from those potatoes, which were undercooked." A fresh attack struck him down; he rolled from the settee to the floor, as visitors and attendants came hurrying to his assistance. He was dead.' (from The Captive) 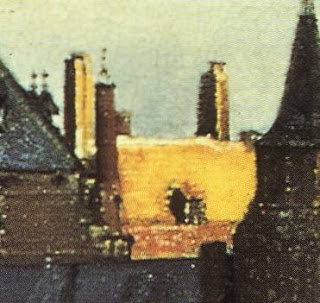 Where is the patch of yellow? It seems to me to be this section of roof. With apologies for another longish quotation, here's a discussion of the issue by Tom Lubbock.


'There are several possibilities in the cluster of buildings at the right end of the far shore. The most obvious is the glimpse of yellow roof (not wall) to the left of the turreted building. The next is the strip of bright wall (not especially yellow) to the right of the turreted building. When he wrote, Proust was probably working from memory – or a black- and-white reproduction.

But let's assume it's the oblong of roof. There's a question you can ask about any famous detail. Does it work by itself, or does it only work in the context of the whole picture? If you extracted the detail, would it be a strong picture in its own right, or would it be hard to see what the fuss was about?

The passage suggests that the little patch all by itself, the sheer precious substance of its painting, so dense and luminous, is what transfixes Bergotte. But the picture suggests otherwise. It's only within the whole view that this patch – suddenly brighter and purer than you'd expect, and with its yellow animated by the adjacent reds and blues (Vermeer always a great one for the primaries) – blazes out. It's not a self-sufficient and extractable gem. It's an integrated effect, a climactic note.

In other words, Bergotte dies under an illusion. His illusion is normal enough. With any climactic note, we tend to feel that it can be isolated and extracted – that its power and preciousness lie somehow within itself, rather than depending on that to which it is a climax.

But this is why it's such a good image of the man's fading consciousness and will to live. Bergotte wants to see this detail as a separately precious thing, something he can isolate and grasp in his hand. Yet he can't – any more than can hold on to this last precious moment of his life.'

Proust's treatment of Vermeer in his novel is discussed in a review of 'Vermeer and the Masters of Genre Painting: Inspiration and Rivalry' be Joseph Leo Koerner in the New York Review of Books.


'On a May morning in 1921 Marcel Proust ventured from his bed, where he spent most of his time, to see an exhibition of Dutch painters at the Jeu de Paume. ... So famous were Proust’s reflections on Vermeer that the 1921 exhibition included The View of Delft just so the ailing novelist could behold his favorite painting one last time.  ... A photograph survives of Proust’s excursion. The last taken of the writer before he died, it shows him standing erect and elegant outside the Jeu de Paume. Before leaving his bed he confided that he didn’t want to ruin the exhibition by dying in the galleries.'

Perhaps the saddest thing about Vermeer’s View of Delft, is that it has to deal with a beautiful townscape devastated by the cataclysmic explosion of 1654. But at least it had been destroyed by accident and not war. This leads me to another acclaimed painting saved from war time destruction. In his The Best Picture , written in 1925, Aldous Huxley described Piero della Francesca’s Resurrection as ‘the greatest painting in the world’. In 1944, a British army captain gave orders that a proposed bombardment of Sansepolcro should be stopped because he remembered Huxley’s essay and he knew that the painting was kept in the town. The town still honours Captain Anthony Sharpe for his action in saving not only the painting but the town from artillery bombardment. There is a street named for him. The Resurrection is a truly marvellous painting but is it, or the View Of Delft, the best painting in the world? I am not sure but I am so glad that both paintings can still be seen and enjoyed.

I'll go with Vermeer any time. Personally I find the Ressurection very theatrical and flat, and the face of Christ too medieval and lifeless (after all he is supposed to be back from the dead, not a corpse). But who am I to criticise?