Publisher and poet Jonathan Williams has often written about music. There is A Celestial Centennial Reverie for Charles Edward Ives, for example, which draws on Emerson and Thoreau ('the poet's flute / is heard / out over / the pond'). There are his epitaphs for composers like Ives, Elgar, Poulenc, Satie, Charlie Parker... some of these connect music to landscape, e.g. Jean Sibelius: 'the drone of overtones in / a rye field by / a river'. And in 1978 came The Delian Seasons, a sound poem inspired by Frederick Delius's North Country Sketches (1913-14).

Williams explains in a note to The Delian Seasons that ‘North Country Sketches is Delius’s only composition evoked by the Pennine Dales of the West Riding of Yorkshire, the landscape of his growing up... Following Delius’s passion for wordless choruses, I have restricted my words (except for three in ‘The March of Spring’) to place names found on four Ordnance Survey maps… Nouns are made to work harder than merely be places. The way they are sounded and placed in the poems owes ‘something’ to incessant listening to North Country Sketches.’ To give you a limited idea of the result, the first one, ‘Autumn: the wind soughs in the trees’ starts as follows 'whins end / whins end / arrant lattera carlin / whins end...'

I suppose this doesn't make a great deal of sense... you really need to see the original poem in its visual arrangement and read the entire thing. I have noticed that Williams has tended to suffer a bit from having his poems republished away from the original settings. For example, Blues & Roots, Rue and Bluets: A Garland from the Appalachians, in its original 1971 edition, had photographs by Nicholas Dean on almost every page and some of Williams' found poems were literally photographs of road signs etc. A 1985 reprint dropped the images and, I think, lost a lot of the impact.

Incidentally, did you know that Frederick Delius has a MySpace site? And that he numbers Beethoven and Schubert among his friends? He doesn't seem to be posting a blog though... 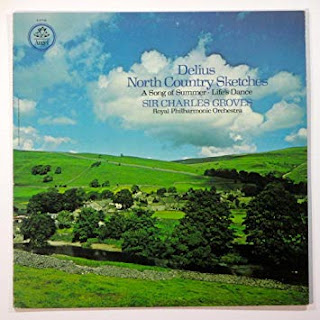 I haven't been over here in a little while - did some catching up. Keep up the great work - I really enjoy your contributions to the topic of landscape.

Sadly Jonathan Williams died soon after I wrote this. There is an obituary here and a good posting at Damn the Caesars blog.