The Artist on the Seashore at Palavas 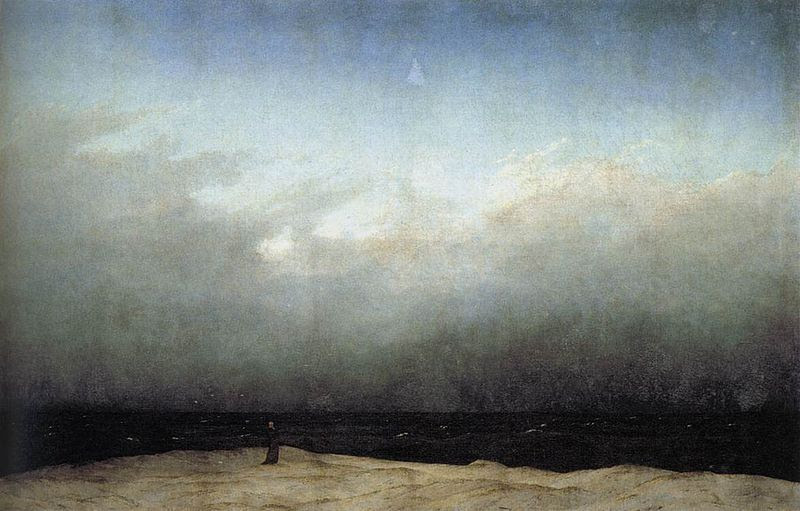 Robert Rosenblum’s book Modern Painting and the Northern Romantic Tradition: From Friedrich to Rothko traces a lineage from Monk by the Sea (1809) to Green on Blue (1956) by way of ‘Romantic’ paintings by Blake, Runge, Van Gogh, Munch, Kandinsky, Ernst, Mondrian... Rosenblum’s thesis was first elaborated in a set of lectures delivered in 1972. It is interesting to think of some of the ‘Northern’ artists from the last fifty years that a revised version of the book written today might include. Andreas Gursky perhaps? Olafur Eliasson? Peter Doig? A look through the index to this site suggests quite a few other possible names.

And what of the other kind of non-Northern, non-Romantic artist? Rosenblum provides a couple of interesting contrasts with the aesthetic of Monk by the Sea. Gustave Courbet’s The Artist on the Seashore at Palavas (1854) combines the same basic elements as Friedrich’s painting. ‘Yet far from suggesting silent absorption into some spiritual beyond, the figure appears strangely earthy and self-assertive. It is no surprise to read Courbet’s comments on this self-portrait: “Oh sea! your voice is tremendous, but it will never succeed in drowning out the voice of fame as it shouts my name to the whole world!”’ Great stuff! For more on Courbet’s ego, see the article by John Golding in a recent New York Review of Books (the same issue has an article about blogs: “Blog writing is id writing—grandiose, dreamy, private, free-associative, infantile, sexy, petty, dirty” - hmm... I’m not sure how many of these adjectives I recognise. But it makes me think Courbet would have written an entertaining blog.)

‘Eleven years later,’ Rosenblum continues, ‘in 1865, Whistler, by then thoroughly steeped in the art pour l’art ambience of Paris, also painted a picture of Courbet, who now stands on the beach at Trouville, once more turned to the unbroken stretch of sand and sea. This time, Courbet’s swollen ego has vanished in favour of a ghost of a figure, hardly discernible as anyone at all. Yet if the presence of this lone figure as the only human element on a deserted beach can evoke some whisper of mood, the painting nevertheless imposes itself primarily as an exquisite tour de force of muted tonalities arranged in horizontal tiers.’ Whistler originally called the painting Harmony in Blue and Silver, thus emphasising its abstract qualities over any sense of sublime mystery. And so both Courbet and Whistler, working in France, represent for Rosenblum a different way of painting landscapes to the Northern Romantic tradition. 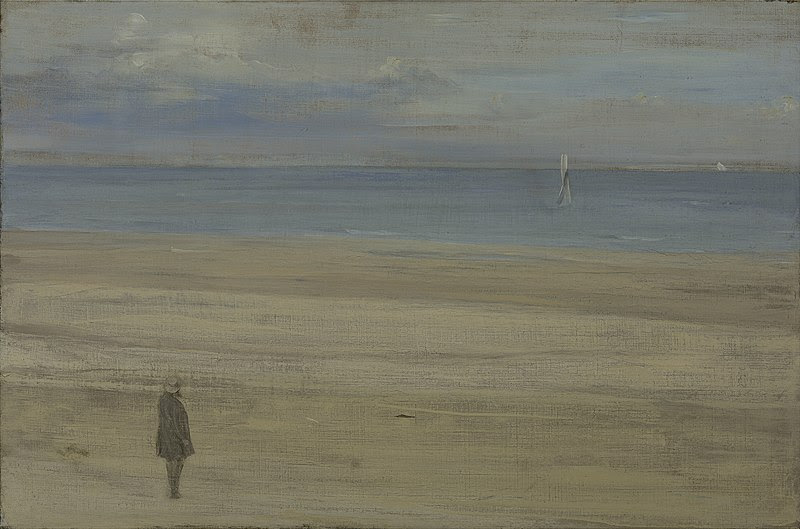 In contemporary art it is no doubt possible, though perhaps not easy, to find similar comparisons. How about Francis Alÿs versus Richard Long for example? Any others? It’s appealing to think that the ‘Northern Romantic tradition’ might still be possible to trace, partly because the whole idea seems so old-fashioned, partly because it is so easy to imagine that today’s global art world would make even such broad generalisations seem, in reality, quite implausible.
Posted by Plinius at 9:07 pm

I love your blog. And I love this painting so so much I can not put it into words.