Autumn is the End 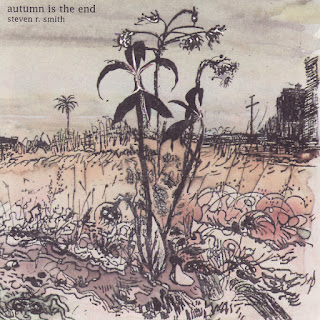 Today I found myself lying in bed with a cold, listening to an old album by Steven R. Smith, Autumn is the End (1998). The record label describes this as 'an instrumental soundtrack for more introspective moments, when time seems to wind itself down, and one gains opportunity for perspective on the landscape.' Smith was one of the Californian Jewelled Antler collective of musician/artists who often recorded outdoors and drew inspiration from nature. Last year Aquarium Drunkard had a feature by Brent Sirota on Jewelled Antler, which was originally a CD-R label founded by Loren Chasse and Glenn Donaldson. It begins a list of recommended listens with Thuja's The Deer Lay Down Their Bones (1999):

'Virtually all roads in Jewelled Antler run through Thuja. Loren Chasse and Glenn Donaldson originally founded the label with an eye toward releasing material by the quartet they had just formed with Steven R. Smith and Rob Reger. And virtually every project in the broader scene shared at least one member with this core ensemble. Named for the great red cedars of the Pacific northwest, Thuja inaugurated much of the mythos of the Jewelled Antler. Appropriately, they borrowed the name of their astonishing debut from California writer Robinson Jeffers’ poem about encountering the decaying remains of a deer in a mountain clearing.'

This poem, 'The Deer Lay Down Their Bones', begins as follows:

'I followed the narrow cliffside trail half way up the mountain
Above the deep river-canyon. There was a little cataract crossed the path, flinging itself
Over tree roots and rocks, shaking the jeweled fern-fronds, bright bubbling water
Pure from the mountain, but a bad smell came up...'

I'll include one more passage from that Aquarium Drunkard article (the log-with-lichen quote below actually comes from Jim Haynes' 2022 Wire magazine article on the Jewelled Antler Collective):

'Sound artist and teacher Loren Chasse once mused about “releasing a piece of log with lichen on it” as an album. It was a joke, but a telling one. Chasse’s work, especially under his Of (and later, Ov) moniker, revolves around playing the found world as an instrument. He once described his art as a search for “acoustical situations,” often around the frontiers where the built environment dramatically gives way to the natural one. Sometimes this amounts to an aural observation, like his “Green Laughter” on The Jewelled Antler Library, which documents the choir of frogs, birds and crickets and cicadas on a summer pond. But, more often, Chasse enlists his natural surroundings as an accompanist, playing alongside and through the tumbling brooks and the wind in the switchgrass.'

Loren Chasse was maintaining his own website ten years ago which is worth a look if you're interested (few seem to bother with blogger any more!) As I'm not feeling up to writing anything here myself, I'll conclude this post with relevant quotes from three Pitchfork reviews:

And finally, fast forwarding to 2022, here's a video clip from Steven R. Smith's latest album, which offers a glimpse of spring...