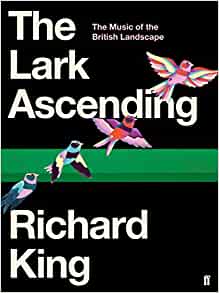 A couple of days ago I read in The Guardian that 'police have warned young people not to attend illegal raves this weekend, promising a tougher approach after two “quarantine raves” attracted 6,000 people last Saturday.'  It made me think of the final chapters of Richard King's book The Lark Ascending which discuss the outdoor rave scene's emergence thirty years ago, followed by opposition that led to the introduction of the Criminal Justice Bill.  Jeremy Deller told a similar story last year in Everybody in the Place (although the participation of children in his film meant he left out some of the drug history).  King describes an early rave organised by Cymon Eckel and the Boys Own network which culminated in dawn breaking over a misty Sussex reservoir.  One of them would later describe seeing 'a flock of geese descend from the sky to make a perfect landing at the water's edge.


And here in the early hours of a perfect English summer's day, five hundred people sitting, or collapsed, on hay bales, grew energised by the dawn and looked out onto the water of Weir Wood Reservoir that borders Ashdown Forest, the location that inspired A. A. Milne's '100 Aker Wood', and the haven Eckel and his friends had created was experienced by all those present as their private Acid House Pooh Corner.'

Last year I saw Richard King give an interesting talk on his book at the Stoke Newington Literary Festival.  He began with his view that the popularity of Ralph Vaughan Williams' composition comes from the way it conveys musically a sense of freedom and at the same time connectedness to an unspecified British landscape.  The full subtitle of The Lark Ascending on my paperback edition is 'People, Music and Landscape in Twentieth Century Britain', making clear that this is not merely a study of music inspired by nature.  In fact there is little in the book about music written to convey a spirit of place - from Vaughan Williams he skips over British landscape composers like Ireland, Bax and Finzi, moving instead to Ewan MacColl's 'The Manchester Rambler' (in a discussion of the Kinder Scout trespass) and then forward to Stan Tracey's jazz suite inspired by Under Milk Wood.  Later chapters discuss the music of Donovan, Gavin Bryars, Kate Bush, Penguin Cafe Orchestra and Ultramarine.  It got me listening anew to some of this on Spotify, though I have to admit I find the late sixties Donovan albums pretty hard going...

The book ends in the 1990s, although there is a brief epilogue featuring Rob St John (it mentions Surface Tension, a piece of music I described here five years ago).  In the new century, issues of ownership and access to land have become ever more complicated, and now the age of coronavirus has raised a whole new set of questions.  The idea of assembling at a rave by a Sussex reservoir this summer would come up against ethical choices around social distancing, pitting hedonism and personal freedom against the interests of the more vulnerable in society.  It is however still possible to go for a ramble, and so, given the reference to Manchester in that piece about an illegal rave, I'll end here with the closing lines of Ewan MacColl's song:


So I'll walk where I will over mountain and hill
And I'll lie where the bracken is deep
I belong to the mountains, the clear running fountains
Where the grey rocks lie ragged and steep
I've seen the white hare in the gullies
And the curlew fly high overhead
And sooner than part from the mountains
I think I would rather be dead