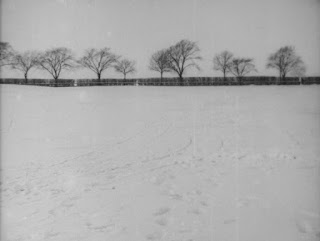 In these days of forced isolation, lots of people are turning to film streaming sites.  If you are interested in silent movies, I can highly recommend the Danish Film Institute's new site which so far has 64 good quality videos from the Golden Age of Danish cinema, including classics like The Abyss and A Trip to Mars.  The first Danish film, Peter Elfelt's Driving with Greenland Dogs (1897), can also be seen there in all its 40-second glory.  It is like a haiku in its brevity, single memorable incident and strong seasonal imagery.  Of course this film's original viewers would have been amazed by the way motion is captured, but viewing it now, what I like is the moment of stillness half way through, after the sled has left the shot and before it enters again from the other side (see image above).  For a second or so you just see a winter landscape with a line of trees like musical notes on the high horizon and fresh tracks written in the snow. 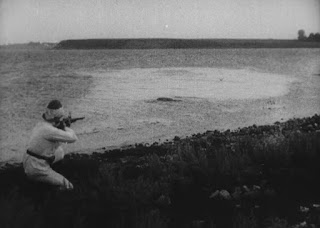 Another film you can see on Stumfilm.dk is Løvejagten (The Lion Hunt, 1907) made by Ole Olsen's Nordisk Film and directed by Viggo Larsen.  It is an extraordinary eleven minutes - a catalogue of tasteless moments that I can't really do justice to in a short description (do all hunters enjoy a sort of post-coital cigarette with the carcass?)  Attitudes change, but even back then the film caused an uproar because the two lions (bought by Olsen from Hamburg Zoo) were actually killed.  Even before these poor creatures and the film they starred in were shot, the Danish Society for the Prevention of Cruelty to Animals was protesting in vain to the Minister for Justice.  The publicity just helped the film become a success.

Most stories from the early years of cinema with external scenes were set somewhere easy to simulate with local scenery.  But Denmark is not well-endowed with jungles and so one was recreated in Jægersborg Dyrehave near Copenhagen, a beautiful deer park (as I recall from visiting it once) but not an obvious setting for a lion hunt.  There's something a bit Douanier Rousseau about the scenes filmed there, with unnatural looking tropical plants sticking out of woodland paths.  The shore on which the lions met their end (see above) doesn't exactly bring to mind a tropical beach either - this scene was filmed on the island of Elleore in Roskilde fjord and watching it you can almost feel the cold wind whipping off the sea.

I will end here with something more uplifting, two lovely tinted photographs which can be found in an article on Danish art cinema by Vito Adriaensens.  He speculates that early non-dramatic travelogue films (now lost) may have had 'atmospheric exteriors' resembling picturesque postcards,


'as could possibly be demonstrated by one of the two Nordisk films Fiskerliv i Norden [literally: Being a Fisherman in the Nordic Countries] (Viggo Larsen, 1906) or Ved Havet [literally: By the Sea] (Ole Olsen, 1909). These two fisherman tales only survive in a Swedish distribution copy in which the two were cut together, but what remains contains two beautiful tinted atmospheric inserts of a moonlit and sunset seascape though it is unclear in which of the two these are featured.'

This footage is not yet available on Stumfilm but perhaps under current circumstances the Danish Film Institute will be able to add more titles like this soon.
Posted by Plinius at 2:35 pm