A view of Magdala

Watercolour World is a new online database of documentary watercolours painted before 1900 which launched at the end of January.  You can use filters and search by a keyword, e.g. 'waterfall', which brings up waterfalls in South Australia, Japan, Italy, French Polynesia and so on.  Enter 'Cozens' and you get a selection of watercolours by Cozens (although the first one is a Turner painting 'after J. R. Cozens').  But perhaps the main attraction is a map which you can zoom around and look for specific landmarks or places.  The distribution of watercolours on the map shows that this is a British initiative - there are over 25,000 watercolours for the British Isles but only around 50 for Japan (and those Japanese images are by late nineteenth century British illustrators).  They do have global ambitions, but the emphasis on 'documentary' images means that there is bound to be a bias towards cultures which valued topographic accuracy (either as art or as part of some branch of science).


Why watercolours and not, say, oil sketches?  Well non-watercolours are allowed in - they include aquatints and pencil sketches, for example, 'at our discretion'.  Perhaps surprisingly, they are happy to have images where the location is unknown, tagging these to the home of the artist.  How do they choose the images?  'We try to select images that have a clear connection to a real person, place or event, that the artist could plausibly have known first-hand. A painting of a battle that happened years before the artist was born would not be included, but an artist's satirical painting of Londoners in a pub would stay.'  As this last comment indicates, the website goes beyond landscape and covers all kinds of subject matter.  I am not sure how they would feel about, artists who were moving away from simple representation, a Cézanne watercolour of Mont Sainte-Victoire, for example.  There are none of these in the database; the only image from this part of Provence is a view of Aix-en-Provence by William Callow dating from 1836. 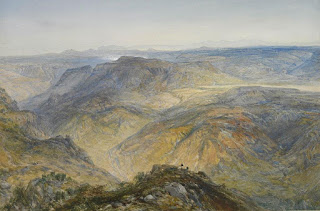 I thought I would check out a a part of the world I don't recall featuring before here - Ethiopia.  In addition to a few archaeological drawings, I came upon the view above. It shows 'a vast stretch of bare tableland with winding gullies, and three figures in the foreground on the spur of a hill'.  There is no further context - the website refers you to the British Museum for more information.  In fact William Simpson had gone to Abyssinia as an illustrator for the London Evening News, covering the British Army's punitive campaign against the Ethiopian Emporer, who had captured British hostages.  Simpson arrived at Magdala after the fighting was over - those tiny figures are therefore looking out over a landscape that had recently seen a siege and bombardment.  Before leaving Magdala, the troops were permitted to loot it and some of the artifacts they took found their way eventually into London museums like the British Museum.  An Association For the Return Of the Magdala Ethiopian Treasures was formed in 1999 to lobby for their return to Ethiopia.
Posted by Plinius at 11:13 pm