One of the most renowned Buster Keaton stunts involves him getting the better of a landscape feature.  Our Hospitality (1923) has scenes filmed at California's Truckee River and when I first saw it I thought the waterfall scene (above) was filmed at a real location.  In reality the whole waterfall was constructed on a Hollywood backlot, as is explained (with photographs) on the excellent Silent Locations website.  I will quote here what John Bengtson says there:


During the climax of Our Hospitality, Buster rescues his girlfriend, played by his first wife Natalie Talmadge, from sweeping over the brink of a waterfall, by swinging like a pendulum from a rope tied to a log jammed in the rocks, grabbing her just as she starts to fall.  Buster’s waterfall stunt set was built astride the [...] T-shaped concrete pool (or plunge as they were called back then) that stood on the Robert Brunton Studio backlot just north of Melrose Avenue, now part of the current-day Paramount Studios lot. 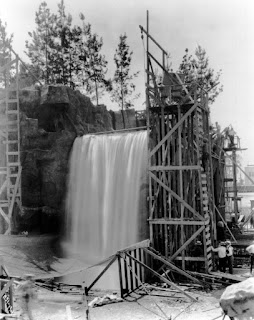 The Our Hospitality waterfall stunt set
Image from Photoplay Productions Ltd via SilentLocations.

In Sherlock Jr. (1924), Keaton, a projectionist, falls asleep and walks in his dream into the motion picture he is showing.  We then see him in a sequence of cuts that seamlessly position Keaton in different landscapes: a rocky promontory (below), a jungle, a beach, a rock in the sea.  This was done using surveying instruments to position him at precisely the right place in each setting.  From the rock in the sea, Keaton dives into the water and lands in a park, then leans against a tree and finds himself in a garden, after which the main story of this film-within-a-film begins, with the humble projectionist somehow transformed into a Sherlock Holmes style detective. 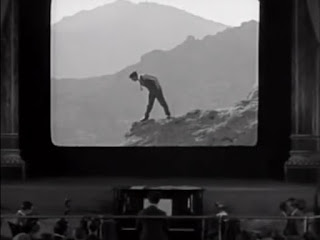 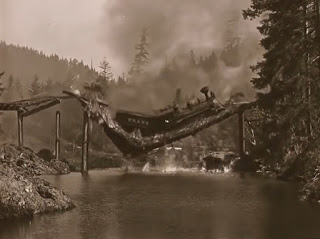 Thinking about Keaton in relation to this blog, it occurs to me that his most spectacular film stunt - building a bridge and wrecking a real train for The General (1926) - had a similar level of ambition to the works of land artists like Christo and Jeanne Claude.  Apparently, bits of Keaton's railtrack can still be seen at the bottom of Row River at low tide.  But if I had to choose my favourite example of Buster Keaton 'landscape art' it would be the moment in The Scarecrow (1920) when he manages to cross a river without getting his feet wet, by walking across it on his hands.

I will conclude here by recommending again the website SilentLocations.com, which is still posting fascinating information on Keaton and other silent movie stars.  Browsing through it I came across the photograph below: if Richard Long had been working in the 1920s he might have looked like Charlie Chaplin in this field.  In fact, this circle is the trace of the departing circus, which is just packing up and leaving The Little Tramp behind.  Detective work by Bengtson and other enthusiasts has identified the location for this scene and even a surviving tree that was there when the film was made.  'Just as there are trees that remain today having witnessed the making of The Birth of A Nation, a giant old oak tree in Glendale, appearing onscreen at left, witnessed the concluding scenes from The Circus.' 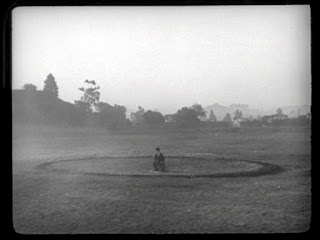 Charlie Chaplin in The Circus
Image from SilentLocations.
Posted by Plinius at 4:35 pm