Reading in the Wilderness 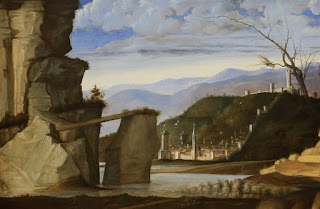 I've not yet been to see the new Bellini-Mantegna exhibition although I see Jonathan Jones was unimpressed (this is not necessarily a bad sign, of course).  However, the Bellini exhibition I would really like to have seen took place in Los Angeles last year, and focused on his treatment of landscape. The Getty Museum's catalogue is excellent and highlighted for me how our understanding of this great artist is still changing as new facts emerge.  Here I want to focus on Bellini's paintings of Saint Jerome, which are the subject of a catalogue essay by Hans Belting.  Bellini depicts Jerome as if he is a humanist in a library rather than a penitent in the desert.  His paintings can thus be seen as versions of an ideal I have referred to many times on this blog: scholarly retreat to a secluded place, surrounded by nature. In the Uffizi version below, 'the saint's attentive look captures the scene's total silence, interrupted only by voices of birds and running water.' 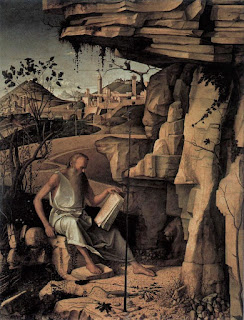 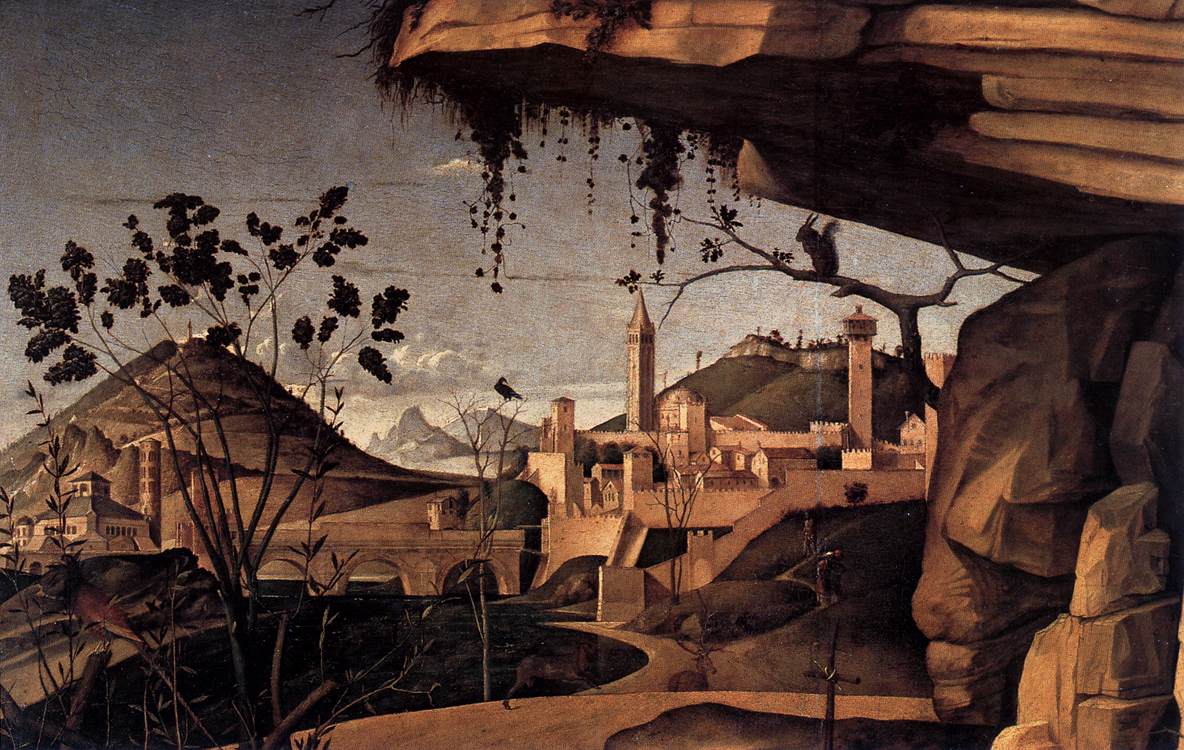 What of the landscape behind Saint Jerome? Here is Belting's description:


'Alongside a river, a zone of barren land puts the fortification of a walled city into the farthest distance.  It is crossed by a long, winding path, which allows us to measure the journey to reach the solitary place.  A hind and a stag roam freely in this depopulated land, while humans appear only below the city walls. The river is flanked by settlements, the city or castello with a Venetian bell tower, and, on the other side, some sort of fortified monastery that resembles San Vitale in Ravenna. The topographical allusions have found various interpretations, since the cityscape is, in Felton Gibbons's words, "a curious potpourri of identifiable monuments".  Only the ruinous bridge over the river, connected to the city gates by wooden planks, seems to be a true portrayal of the old Roman bridge in Rimini as it looked in Bellini's time.  What matters is the realism of the Venetian settlements in the background and the contrasting view of solitary life in nature.'

Here in London, the National Gallery has a very similar version of this composition (above), with the saint again intent on his book, but a different landscape behind him.  This painting was in the Getty Museum's exhibition, along with a later panel now in Washington (below), in which the saint sits by the entrance to a grotto.  A whole range of possible allusions have been found in its detailed landscape, which Bellini painted with the attention to detail we would associate with Flemish artists. As Susannah Rutherglen's catalogue essay points out, these are often contradictory... 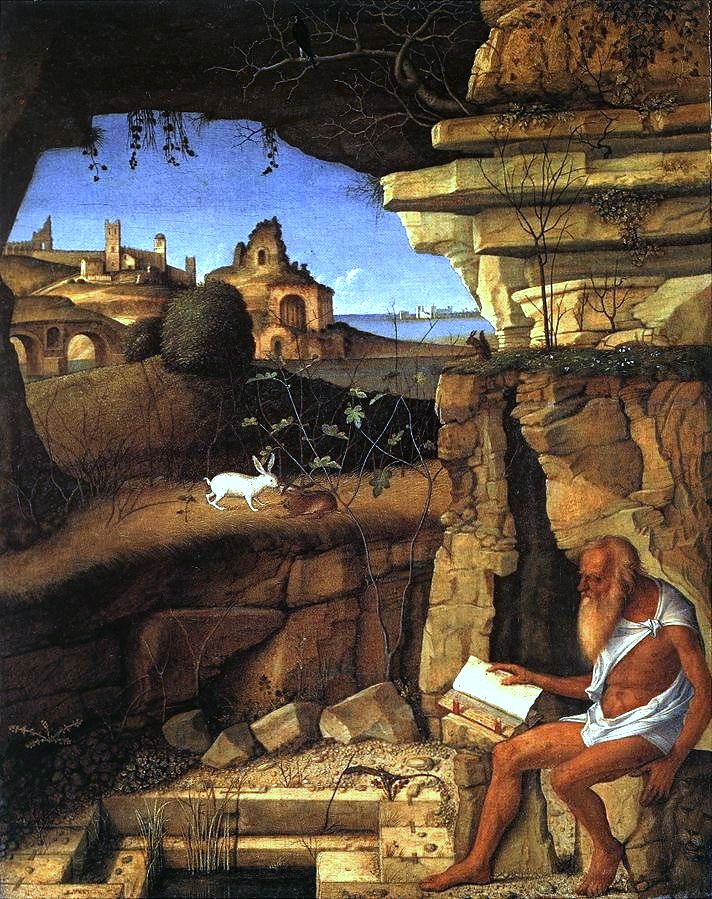 Finally, there is an unusual altarpiece which Bellini painted as an old man. By this stage he had come under the influence of Giorgione (and outlived him).  Jerome is again shown reading, sitting on the trunk of a fig tree.  Belting quotes Roger Fry, writing in 1899, who found this


'the strangest, most romantic enthronement ever conceived - an old hermit, who has grown by long years of secluded contemplation into mysterious sympathy with the rocks and plants and trees of his mountain solitude, sits in a scarlet robe, silhouetted against a golden sunset sky, across which faint purplish clouds are driven by the wind; and below him there spreads a vast expanse of valley and mountain ridges.  Bellini's intimate Wordsworthian feeling for the moods of wild nature finds here its remotest and sublimest expression.' 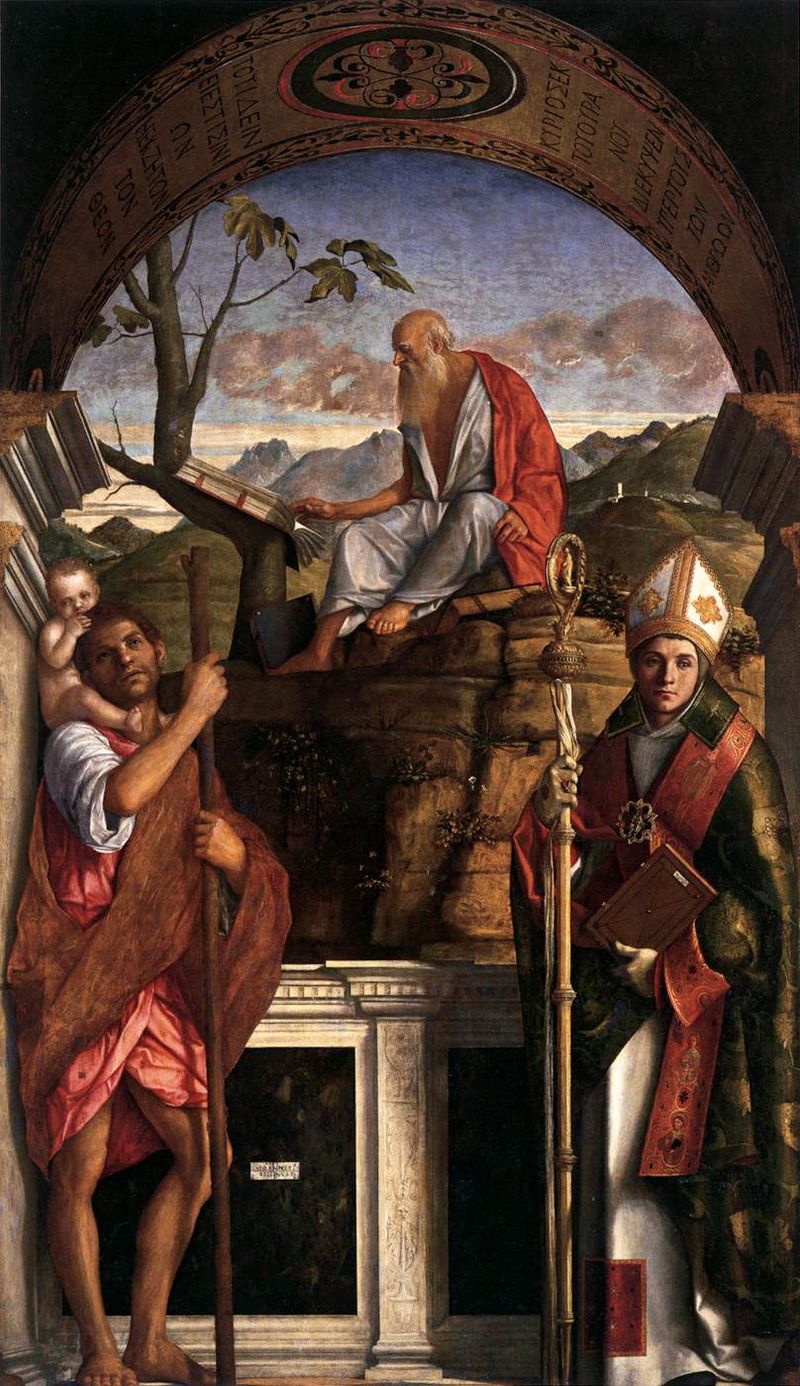 Email ThisBlogThis!Share to TwitterShare to FacebookShare to Pinterest
Location: Venice