The field has eyes and the wood has ears

Joseph Leo Koerner's magisterial Bosch & Bruegel: From Enemy Painting to Everyday Life (2016) is so rich in interest it could furnish material for many blog posts.  Of the two artists, it was of course Breugel who was most influential on landscape painting.  I will do a post on Bruegel, but here I thought I would focus on Hieronymus Bosch.  The Tree-Man features in the right hand panel of his great triptych The Garden of Delights (c. 1490-1510), one of the monsters of Hell.  But he is also the subject of Bosch's largest surviving drawing (above), transplanted to a scene of marshes like those that surrounded his native town, 's-Hertogenbosch.  Beyond the marshes, as Koerner observes, there are 'harbor towns on a maze of waterways, like the huge delta where the Rhine, Meuse, and Scheldt rivers meet; and beyond the visible horizon, at a distance plotted by church spires and vast like the sky, the sea.  There the Tree-Man idly floats like some outlandish carrack adridt in an inland canal.' 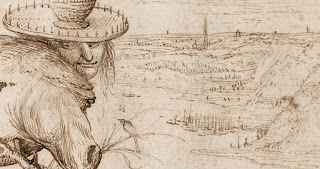 Some contemporaries of Bosch would have witnessed strange phenomena.  Koerner reproduces a sketch of a beached sperm whale drawn by Hendrick Goltzius in 1598 and recalls the story of Dürer trying to sketch another whale on his trip to Zeeland in 1520, only to arrive after the tide had carried it back out to sea. 'Netherlandish shores were natural theaters where wonders could be observed.'  Moreover, the Tree-Man 'travels in a real world along waters that, connecting near and far, explain how the monstrosity might have got there.'  The fact that this realistic landscape surrounds Bosch's fantastical figure makes the image seem 'to encompass the world complete in itself.'  It was only around 1500 that artist's own drawings became collectable and this strange image may actually be the first autonomous pen-and-ink sketch in northern art.

Before leaving Bosch it is worth mentioning another remarkable sketch, which at first sight simply depicts a tree in a landscape.  Here (and note the characteristically witty turn of phrase which makes Koerner's books such a pleasure), the 'dead tree serves as a shadowy refuge for an owl, which eyes us with dubious intent.'  Owls appear at least twenty-five times in Bosch's art and can almost be seen as a kind of signature.  In Dutch they were sometimes called boschvoghele.  Above the owl there are shrieking birds and below, at the base of the tree, a rooster pushing its way towards a fox, apparently resting.  But this is a Bosch drawing and so there are also two large ears standing in the thicket and eyes scattered over the ground.  The slope of the field reminds Koerner of the 'subtle curvature of the surface of the earth, ensuring that whatever the work's statement is, it will be global.'  And what does it mean?  'Historians have managed to reattach these stray sensoria to a proverb current in Bosch's day and published and illustrated in a woodcut dated 1546, "The field has eyes and the wood has ears; I will look, stay silent, and listen."'  In other words, in hostile times, it is wise to keep one's counsel. 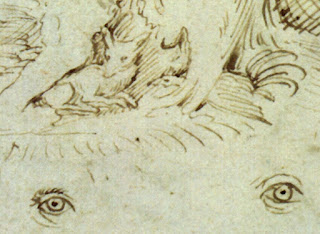