Cattle and their doubles in the lucid shallows of the bay 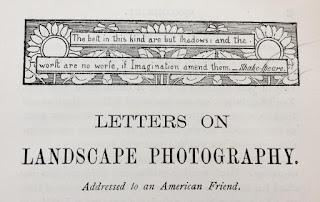 This little book, Letters on Landscape Photography, was published in London in 1888.  By then there were numerous such books dedicated to the hobby, but many people, like its author Henry Peach Robinson, were old enough to recall the days when photography was still in its infancy.  It would take almost another century for the question that underlies the book - can photography be art? - to be definitely settled by museum curators in the affirmative.  Robinson writes that ‘more than twenty years ago, when the opposition to art in photography was at its fiercest, there was a capital article on landscape painting in a now dead review.’  The author of this article had criticised the idea of the landscape photographer with an anecdote about a trip to the Highlands.  There, one day, he had settled down to paint en plein air, having found the perfect spot in a ‘wide open space of sea and sky, with a glorious foreground of cattle and their doubles in the lucid shallows of the bay.’  He was soon painting quietly...


'The ripple hardly broke louder than my pulse.  Presently a stoat bounds into the road, and I had time to observe what enjoyment of life there was in the unalarmed, untamed step of the creature.  The heron rose near me; and as I was beginning to take it all in with half-shut eyes, and to remark how the powerful tones of the cattle, fawn and flame colour, white and yellow, blood-red and black, seemed to give infinitude to space – a photographer walks briskly before me, and with an air and noise of satisfaction begins to open and adjust his box.  I give you my word that the look of quiet horror that came over the scene was unmistakable – not horror exactly – did you ever remark the face of a girl when she sets it?  It was precisely that.  Not only did the stoat disappear, but – I don’t know whether it was the creaking of the machine, or the business-like stare of the man – the cattle grew conscious and uncomfortable, and it was not without satisfaction that I saw a mist creep up from the sea, and steal away the shimmer and the charm.  I left him some cows lashing their tails, some blackthorn and Scotch fir, and the average coast formation.’

Robinson concedes that this is prettily written but thinks ‘this sort of tip-tilting of the nose at photography as an art is only possible now with fifth-rate painters, or, in the press, with their friends, or those who have failed in the art.’  It's a good example of the never-ending arguments about how to behave in the landscape and have an 'authentic' experience of nature.  These will return every time there is a new technological development that provides a novel means of 'capturing' the view.  I note that the title of Hamish Fulton's new exhibition, starting next week in Munich, is called 'Walking without a Smartphone'...  The paragraph is interesting too from a gender perspective, where the painter is permitted to see the view in its natural state, while the business-like 'stare of the man' with his camera prompts nature to set her face.  You half expect the photographer to be set upon by dogs like Actaeon.  And yet there remains an impression that the painter himself has not really been seeing what is before him, apparently and paradoxically able to 'take it all in with half-shut eyes...' 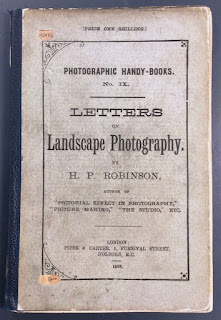 Email ThisBlogThis!Share to TwitterShare to FacebookShare to Pinterest
Labels: plein air, viewing points
Location: The Highlands near Oban, setting for the anecdote