Rose, open door of the year 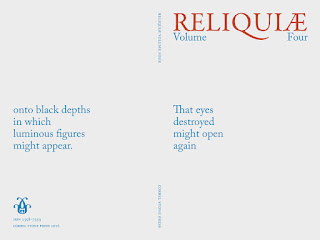 The fourth volume of the journal Reliquiae is now available.  I have referred here in previous posts to some of the authors included in earlier editions: Hans Henny Jahnn, Jürgen von der Wense, Étienne Pivert de Senancour.  This time I was particularly keen to read some new translations by Tess Lewis from the journals of Philippe Jaccottet, the Swiss poet I wrote about here back in 2009.  That post gave some brief notes on Jaccottet's ideas about landscape, based on Mark Traherne's introduction to the Bloodaxe volume, Under Clouded Skies / Beauregard.  Traherne quotes an entry in Jaccottet's notebook selection La Semaison ('Seedtime') for 1966 which could be a description of the pleasures of a volume like Reliquiae: 'The ideal book is in fact several books, by different authors, each one capable of dealing only with certain aspects, writing only certain pages.'

Intertextual dialogue with other other writing is, for Traherne, a particularly rich element of Jaccottet's writing.  You can see this in the selections from La Seconde Semaison included in Reliquiae, where Jaccottet mentions Mallarmé and Petrarch and quotes Yeats and Silesius ('God is the green of the fields').  After Jaccottet, in a nice anthology juxtaposition, there are four brief poems by Silesius, translated by Paul Carus in 1909.  Here's my favourite:


Rain rains not for itself,
Nor to himself adorn
Shineth the sun; so thou
Not for thyself art born.

The German mystical writer Angelus Silesius (c. 1624-77) was an influence on Jorge Luis Borges, who once ended a lecture on the nature of poetry by saying that everything he had said could be summarised in the line, 'Die Ros ist ohn warum; sie blühet weil sie blühet' - 'The rose is without 'why'; it blooms simply because it blooms.'  Borges used the symbol of a rose in a moving poem on blindness, 'The Unending Rose', which closes my old Penguin edition of The Book of Sand.  Jaccottet often uses the French adjective/noun 'rose' - see for example Helen Constantine's translation of a poem on a mountain landscape from his collection Cahier de Verdure ('Rose, sudden as a rose / appearing in the cold season ... Rose, open door of the year').

The Reliquiae selection from Jaccottet begins with a description of the colours of a summer evening ('une bande rose persiste au-dessus de l'horizon gris-bleu').  Just before night descends, the light resembles pink dust ('une poussière rose').  Colours fade, a nightjar begins to hunt, a cold white moon shines at the roofline and the first star in the east is visible: 'it, too, is crackling, icy.'  Six months later, in an entry for January 1981, Jaccottet compares poetic images to doors that seem to open: a nightjar's flight, an invisible stream, or 'the dog rose, which surprised me each time I saw it.  Its branches formed an arch under which one is tempted to pass, as if to enter a different space while nonetheless aware that it was, in a sense, not 'real'.'  All art, he concludes, is of this order, 'converging towards what is secret and without name.' 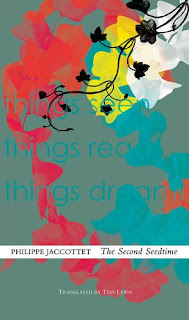 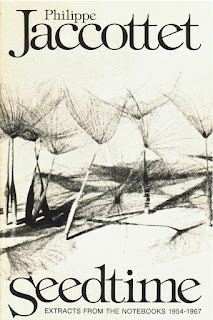