Earlier this month we were at Tate Modern for Rob St John's participatory installation Emergent Landscapes. There were two elements to this: painting clay tiles with a solution containing lichen spores, and speaking into an old gramophone horn as a contribute to a collective Tate soundscape.  The tiles will form a cairn at Hooke Park, a woodland in Dorset owned by the Architectural Association, and the tape of sounds will be buried inside it.  Rob might not be the best person to give a mixtape to - I mentioned here last year a concert involving tapes that had been 'soaked in tubs of polluted Lea river water – duckweed, decaying leaves, oil slicks and all – for a month.'  We last encountered him en famille nearly three years ago at Ambika P3 when the kids had a go at wind drawing.  On this occasion they enjoyed painting with lichen (a mixture resembling watery pesto) and adding rude noises to the soundscape, which I can only hope time and the weather will transform into something more beautiful. 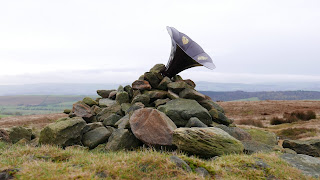 Painting actual shapes 'with lichen' felt rather odd, distantly related to topiary or making pictures out of bedding plants.  The beautiful abstract patterns it makes on stone (like the Temple of Apollo at Stourhead) are beyond our control.  The way lichen colonised those road signs, symbols of the way way we order and structure landscape, in Patrick Keiller's Robinson in Ruins, was a reminder that nothing can stand outside time.  As I mentioned here recently, Musō Soseki's fourteenth century garden Saihō-ji eventually became famous for its mosses after a period when it fell into disrepair.  Painting my tile, I wondered whether the lichen would ever really grow (particularly if it was placed somewhere in the middle of the cairn), and if the sculpture would remain in the landscape long enough to evolve into something new, and also whether people would still know what it was in decades to come.  I thought about sculpture parks filling up and future curators only retaining works by the most famous artists; perhaps though, as with cemeteries, it will be the mixture of the remembered and forgotten that our descendents will value.

The dates on graves can be used as convenient information for studying the proliferation of lichen species.  Lichen has also been used to try to date ancient petroglyphs.  Rob mentioned reading about some Australian rock art that now actually only exists as lichen, where the ancient organic pigment has slowly been colonised.  I liked this story because we normally think of cave paintings as threatened by mould and lichen, especially once exposed to visitors.  This came up during a gallery talk with literary geographer Amy Cutler, in which there was lots to say about time and landscape, relational aesthetics and the way this work is connected with the new architecture at Tate Modern.  They could have spent a long time on the fascinating topic of cairns.  Rob referred to the problem of 'ego cairns', built by visitors to national parks which can add to problems of erosion.  The cairn we were contributing to is not designed to blend naturally into the woods - the intention is to embed within it, in addition to the reel of tape, some red perspex tiles.  This was a reminder of the difficulties in deciding how low-impact environmental art needs to be and whether it has to acknowledge the artificial in order to seem authentic.
Posted by Plinius at 2:22 pm