Ashide, reed writing, developed in the Heian dynasty as a form of calligraphy written in such a way as to imitate natural forms: reeds, rivers, trees.  By the twelfth century they were being written over actual landscape paintings, creating a hybrid form.  There is an example dating from 1160 in the Kyoto National Museum by Sesonji Koreyuki (or Fujiwara no Koreyuki), Poems from Wakan Roeishu.  'As the line of characters crosses the drawn-out contours of the image, it transforms into sprouting grasses and cranes standing along what might be a riverine strand' (Thomas LaMarre, Uncovering Heian Japan: An Archaelogy of Sensation and Inscription). Landscape is depicted in the overall image and text, but also registered at different levels of magnitude in the shapes and sounds of the individual words.  This artwork opens up the possibility that calligraphy can itself evoke elements of the setting and atmosphere, like a film soundtrack, whilst words and pictures tell the story.

If calligraphy were to take on too many of the attributes of landscape painting it would lose its status as an artform.  The point is made by Stephen Addiss in relation to the first piece in his book 77 Dances: Japanese Calligraphy by Poets, Monks and Scholars, 1568-1868.  This poem, a detail of which is shown here, was written by Emperor Goyozei (1571-1617).  The most heavily inked characters mean big well river and the next most visually stressed character means snow. ‘Even a quick viewing therefore reveals the main theme of the poem: the Ōi River in snow.’ And although this is not an example of reed writing, since its symbols do not have a dual role as words and image, the paper itself provides a subtle link to its subject matter:


‘The primary pattern on the paper is that of waves, sometimes almost still and sometimes curving, with a secondary element of reeds appearing several times. Near the top, however, a heavier undulating line in blue suggests possible islands in the river or perhaps even the nest of reeds covered with snow. If the latter, it is done in a semi abstract manner, since too much visual correspondence with the poem might be considered vulgar by refined court aesthetes.’ 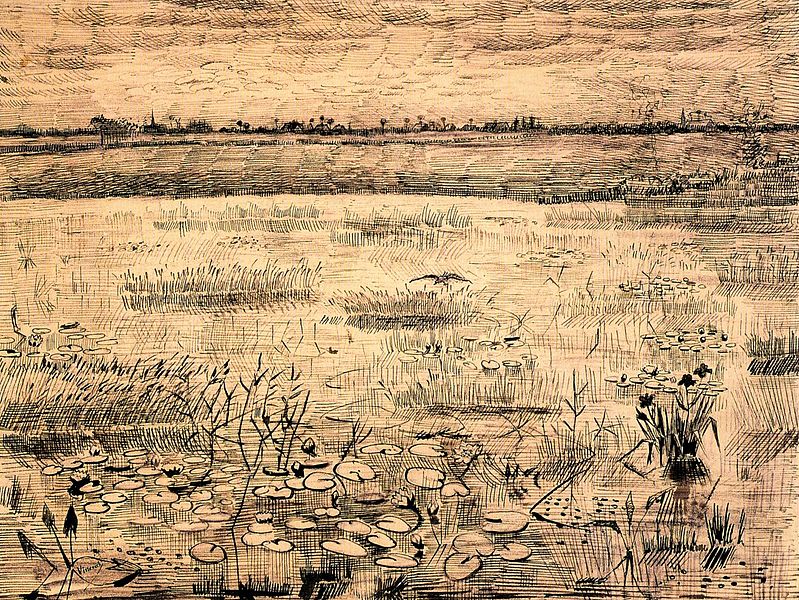 From a Western perspective the idea of 'reed writing' evokes the idea of the reed pen, used in landscape art by Rembrandt and Van Gogh. In 1888 Van Gogh wrote to tell his brother "These drawings are done with a reed cut the same way as you’d cut a goose quill. I plan to do a series like that. And I hope to do better than the first two. It’s a process I already tried in Holland in the past, but I didn’t have as good reeds there as here."  I have mentioned his use of a reed pen before in relation to an 1881 drawing of the marsh at Passievaart.  And I'll end here by quoting Robert Hughes on the way Van Gogh used his reeds to draw stems of grass in a style that approached calligraphy.


'The reed was not flexible, like other pens. Nor did it hold a lot of ink, so it would not produce long, sinuous lines. The style it favoured was short, blunt, angular and (in a limited way) calligraphic. In some drawings you can see Van Gogh brilliantly exploiting the limitations of the reed. He draws a tuft of grass, for instance, as five or six springing, more or less parallel strokes. The first one is heavy with ink. The next, less so. By the fourth or fifth, the reed is almost empty and the ink strokes faint. This creates the impression of a round tussock, rendered not as flat pattern, but turned towards the light. Then he dips his reed in the ink bottle, recharges it and begins again, on a different clump of grass.'