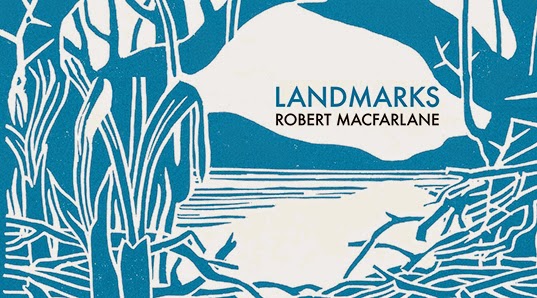 You might feel you have read enough about Landmarks over the last few days - an essay by Robert Macfarlane in The Guardian introducing his new book (which, as I write this, has been 'shared' 39,000 times), reviews, excerpts, interviews, even an unfunny parody.  I will not add much to all this here, although as the book explores the literature of landscape as well as its language, there are many pages it would be nice to quote.  I will restrict myself to one example, from a chapter devoted to 'Edgelands', where Richard Jefferies (writing in 1883) is read as a philosopher of vision, anticipating geography's phenomenological turn and those contemporary artists and authors who approach landscape as bodily experience.


'Often Jefferies wobbles our sense of reliable vision, showing the impossibility of achieving a privileged position of perception: 'Even trees which have some semblance of balance in form are not really so, and as you walk round them so their outline changes.'   If you 'walk all round [a] meadow ... still no vantage point can be found where the herbage groups itself, whence a scheme of colour is perceivable.'  Repeatedly, phenomena refuse to resolve into order: a wind blowing across water makes 'wavelets' that 'form no design; watch the sheeny maze as long as one will, the eye cannot get at the clue, and so unwound the pattern.''

The pattern may be indiscernible but the phenomenon can be named.  In Landmarks the 'Waterlands' glossary offers for wind-blown ripples on the surface of water the word cockles.  In Gaelic there is a term for the 'first slight ruffling of the water after a calm' (caitein) and in Scots there is a word for 'a splashing or dashing in small waves or ripple' (jabble).  Jefferies worried that we fail even to see such things and it is the details in landscape that Landmarks celebrates, rather than its broad sweep.  Under 'Pools, Ponds and Lakes' the words for the largest bodies of water are well-known to anyone who has used a map in the British Isles - llyn, loch, lough, tarn.  But focus down and you reach less familiar terms - large ponds are grimmers and hassocks, small ponds are mardles and pulks, puddles are swidges and blatters, little puddles are pudges.  The Gaelic word lodan can mean both a little pool and 'water in one's shoe.'

Some Robert Macfarlane readers coming to this after his previous books may expect more action and less quotation.  No doubt there will some arduous activity in Underland, the book he is now writing on caves.  In Landmarks he does praise the 'unostentacious bravery' of Roger Deakin, borne along in the swell of a tide, 'locked in by the current, with no obvious means of escape', and he quotes the 'exceptionally intrepid' John Muir, surfing an avalanche in the Sierra Nevada ('on no part of the rush was I buried.  I was only moderately imbedded on the surface or at times a little below it...')  However, the only hint of risk-taking is in the Cumbrian fells where Richard Skelton invites him to explore a tunnel in an old quarry.  Earlier that day, before the rain set in, Robert had been reading a story (in Richard's journal Reliquiae) from The Kalevala in which a similar cleft in a hillside must be entered by the hero to find 'the lost words'.  The coincidence provokes 'an eerie tremor of recognition'.  They explore this tunnel by the light of a weak torch as water courses through the roof, 'showing silver in the beam, like silk.'  After a few minutes they retrace their footsteps and return to the path, now running with water, wet but unscathed.  'I could feel feel rain streaming down the inside of my trousers and into my shoes.'  Water in one's shoe - lodan.


This blog is listed under the heading 'On Language and Landscape' in the Landmarks select bibliography.  The best way to find relevant posts here is to click on the 'language' label, although I suspect I have not been rigorously consistent in the way it has been used.  I have tended to append it to posts talking about words themselves, like the one I wrote this week on the old rune poems, but other entries may also be of interest, like those I wrote earlier this month on landscape as metaphor in the poetry of John Donne and the Chan Buddhist monks of China.  Looking back I see that the second post I ever wrote on this blog, back in 2005, was on language and landscape.  It quotes one of the books that influenced Landmarks, Arctic Dreams by Barry Lopez.  'For Lopez, language is not imposed on the landscape, it evolves from a conversation, and “a long-lived enquiry produces a discriminating language”.'
Posted by Plinius at 10:43 pm