'The Claude Glass was an optical device which took various forms, of which perhaps Thomas Gray's was the most typical: 'a Plano-convex Mirror of about for inches diameter on a black foil, and bound up like a pocket-book.'  The convexity miniaturised the reflected landscape.  Except in the foreground, details were largely lost, and something like a beau ideal emerged, freed from particularities and deformities. [...] Its 'complex view' helped the apprentice painter; and, for the non-painting tourist, its darker tinting and distortion helped to superimpose something like a Claudean idiom on British landscape.' - Malcolm Andrews The Search for the Picturesque

Claude Glasses in The Science Museum

I have been reading Arnaud Maillet's The Claude Glass: Use and Meaning of the Black Mirror in Western Art.  It originally appeared in France in an edition of just a hundred copies, but was translated and published as a Zone Book at the instigation of Jonathan Crary (whose Techniques of the Observer has been a key text in visual studies).  That small initial print run may reflect the surprising fact that, according to Maillet, 'in France, these instruments are virtually unknown, even by art historians'; whilst it is relatively easy to see them on show here (e.g. in the Science Museum), there are none in French collections.  The scope of Maillet's book goes well beyond the instrument used by Picturesque tourists and artists in the late eighteenth century.  In addition to covering earlier uses of convex mirrors in art, he considers the association of black mirrors with the dark arts and their use in catoptromancy and hypnotism.  He also finds black mirrors in more recent art (Boltanski, Richter, Perrodin) - abstractions and reflective surfaces that call into question what we are seeing - and he explores their association with loss, melancholy and mourning. 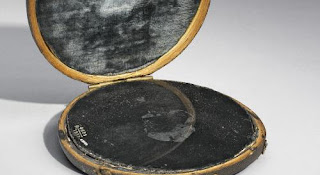 The term 'Claude Glass' has also been used for another viewing instrument sold to Picturesque tourists: a set of tinted viewing lenses.  These lenses could create the kind of tonal harmony we encounter only rarely in real life - in mist, at sunset or in the smoke of a fire.  Like the filters available now on photographic apps, they allowed the viewer to perceive the landscape in different lights.  For example, 'through the hoar-frost tinted lens, distant corn stooks become snow drifts.  The tourists could rationalise these fancies by claiming that such artifice was, after all, only a means of anticipating what Nature herself would be doing in a few hours' or a few months' time with the same landscape' (Andrews). The leading theorist of the Picturesque, William Gilpin, tried these Claude Glasses while riding in a chaise and saw a dream-like succession of 'high coloured pictures'.  Their usage was easy to satirise though, as Maillet points out, and I will end here with the quotation he uses from James Plumptre's comic opera The Lakers (1797).  Miss Veronica Beccabunga is looking through her 'Claude Lorraine Glasses' at the landscape between Derwent Water and Borrowdale.


'Speedwell, give me my glasses.  Where's my Gray?  (Speedwell gives glasses.)  Oh! Claude and Poussin are nothing.  By the bye, where's my Claude-Lorrain?  I must throw a Gilpin tint over these magic scenes of beauty.  (Looks through the glass.) How gorgeously glowing!  Now for the darker. (Looks through the glass.)  How gloomily glaring!  Now the blue.  (Pretends to shiver cold.)  How frigidly frozen!  What illusions of vision!  The effect is unspeakably interesting.'

Later Miss Beccabunga uses her glasses on her prospective husband.


'I'll throw a Gilpin tint on him.  (Looks through the glass.)  Yes, he's gorgeously glowing.  I must not view him with the other lights, for a husband should not be either glaringly gloomy, or frigidly frozen; nor should I like to be haunted by a blue devil.' 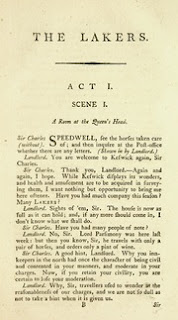 Interesting contrast of looking "through" and "at" here. The classic Claude glass is definitely an opaque "at" device -- a way of simplifying blocks of tonality. I wonder if there were also translucent versions (like looking at an eclipse through smoked glass)? Or whether Plumtre simply didn't know how to use one?

The glasses were different, a set of translucent filters - you can see an example here.

How amazing -- thanks for that! Steam-punk Photoshop...