And the snow melted in one breath

I said in an earlier post that I might return at some point to In the Field, the book of interviews with field recordists put together by Cathy Lane and Angus Carlyle of CRISAP.  Here I want to highlight the work of one of their interviewees, Hiroki Sasajima.  He makes, for example, an interesting observation in relation to, Colony, a collage of insect sounds recorded at various locations over the course of three years.  "In Japanese culture, appreciating the sounds of insects is a tradition that goes back to olden times, their sounds enjoyed as songs, as a voice or as a message from another creature ... I found some research that showed evidence that Japanese brains have learned to deal with the insect voice as a creature's voice while European and American brains apprehend insect sound as noise."  Some of these theories about the Japanese brain may be scientifically dubious but there is no doubting the special place insects like the cicada have in Japanese culture (one of Basho's most famous haiku, for example: 'In the silence of a temple, / A cicada’s voice alone / Penetrates the rocks').  Among The 100 Soundscape of Japan designated by the government in 1996 to combat noise pollution there are several that reflect this love of insects: suzumushi (bell-ringing insects) in Miyagino, cicadas at Yama-dera, tree crickets on the banks of Yodo River.

The track embedded above was recorded by Sasajima in a bamboo grove: "At night," he explains, "when the snow absorbed all the sound, the place was silent, a place of no sound.  Then, with sunrise, the temperatures heated up and the snow melted in one breath."  Much less accessible on first listening, Into the Nothings, was "recorded in the 'sea of trees' in Fuji.  The sea of trees in Fuji is famous as a mystery zone where you cannot use a compass and where once you have lost your way you will never return."  It sounds like a legend but this place is very real: iron in the volcanic soil prevents mobile phones from working and (according to an article on Tofugu) 'the tree coverage in Aokigahara is so thick that even at high noon it’s entirely possible to find places shrouded in complete darkness. It’s also mostly devoid of animals and is eerily quiet. Hearing a bird chirping in the forest is incredibly rare. The area is rocky, cold, and littered with over 200 caves for you to accidentally fall into.'   It is a notorious site for suicides (second only to the Golden Gate Bridge) and Sasajima' field recording conveys an atmosphere of claustrophobic menace. 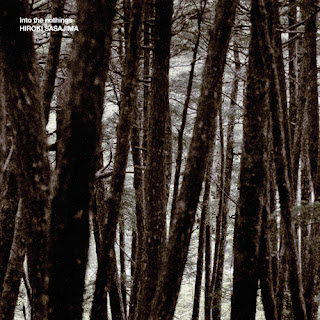 There is a long association between caves and music (exemplified by two of my previous posts here, on Felix Mendelssohn and Akio Suzuki, visiting Scotland nearly two centuries apart).  Water drop, the clip embedded below, was recorded by Sasajima at the Nippara limestone cavern near Tokyo.  Inside, the dripping water from a stalactite reverberates inside a suikinkutsu, a vessel usually installed in Japanese gardens (as I described in an earlier post on the way sound artist Jem Finer had adapted the idea).  Reading about this place I thought of Wallace Stevens' poem 'Anecdote of the Jar', which landscape writers often quote to explain the way art can turn nature into culture ('I placed a jar in Tennessee, / And round it was, upon a hill. ... / The wilderness rose up to it, / And sprawled around, no longer wild...')  In the Nippara caves a jar has been placed in the ground to turn the natural action of rainwater into an endless piece of music, of which Sasajima's composition is no more than a drop.  And he is not the only Japanese artist to have recorded these underground soundscapes: Eisuke Yanagisawa made a whole album, Into the Cave, there and observed that 'the cave itself can be regarded as a huge suikinkutsu. Once stepping into the cave, I became a part of the natural sound sculpture, listening to it and resonating with it.'