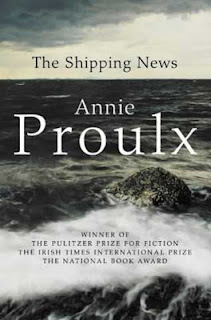 'Millenial bergs from the glaciers, morbid, silent except for waves breaking on their flanks, the deceiving sound of shoreline where there was no shore.  Foghorns, smothered gun reports on the coast.  Ice welding land to sea.  Frost smoke.  Clouds mottled by reflections of water holes in the plains of ice.  The glare of ice erasing dimension, distance, subjecting senses to mirage and illusion.  A rare place.'

This is Newfoundland, described in  Annie Proulx 's novel The Shipping News.  The book was partly inspired by The Ashley Book of Knots (1944), an eleven-year project by artist-writer-sailor Clifford Warren Ashley who dies shortly after completing it.  Chapter 29, for example, begins by quoting Ashley's description of the bite, 'a curve or arc in a rope no narrower than a semicircle.  This corresponds to the topographical meaning of the word, a bight being an indentation in a coast so wide that it may be sailed out of, on one tack, in any wind.'  In 'Big Skies, Empty Places', a New Yorker piece on her influences, Proulx talks about the 'specialised phrases and names that have come out of human work and travel through the landscapes.'  She has collected dictionaries of logging and maritime terms but regrets that they are 'nearly always sanitized', when they should be 'rich in graphic sexual imagery.'  Another very different influence is Robert Smithson: 'the map he makes out of a heap of broken glass, or his vanishing points that do not vanish, or his mirrors 'displaced' in the landscape.  He once photographed rocks in situ, then removed the rocks and photographed the holes in the ground - absent presence.'  She likens the role of women in rural communities to an absent presence, which is why they are rarely the main protagonists in her fiction.  And she says that when she writes, 'I try to make landscapes rise from the page, to appear in the camera lens of the reader's mind.  The reader is also an absent presence, but one that's leaning a sharp and influential elbow on my shoulder.'

that's rather fascinating. I've still to read that book. Not far from us is Tietiesbaai. An obvious landmark for the local fishermen.