‘I look for it always, the thick, vespertine gloaming that douses the day’s heat. When it comes, the landscape grows soft and vague, as if inadequately summoned by some shiftless deity, casually neglectful of details. Making a photograph in these conditions is a challenge, even for modern blue-sensitive film, and the resulting image often appears to have been breathed onto the negative, a moist refulgence within deepening shadows.’ 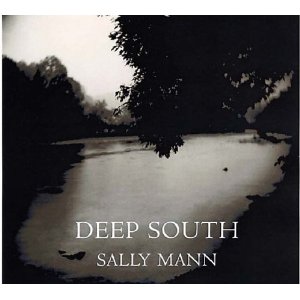 Looking through the black and white images in Deep South you see this Southern light, creating a halo round ivy coloured tree trunks, illuminating the mist over a river, or saturating the view of a wooded slope so that the landscape is barely visible at all.  One photograph shows the gateway to what looks like some abandoned antebellum house, trees blurred by light or wind, by the camera’s focal length, by imperfections in the old glass negative she has used, or in some mysterious way by the action of time itself.  She writes that Southerners, like Proust, ‘know love emerges from loss and becomes memory, and that memory informs and enriches art.’ This aesthetic transformation was harder to make however when she travelled further into the Deep South.  'It was impossible for me to drive the vine-hung back roads of Mississippi and not think of the invisible sediment of misery deposited at every turn.’ One image simply shows a nondescript bank of grass and a flat expanse of river. This was taken ‘one serenely mote-floating, balmy, yellowish October afternoon' at the spot from which the fourteen-year old Emmett Till was thrown into the Tallahatchie River.’

Whilst some of the photographs in this book may seem overly nostalgic or Picturesque, others taken on the Civil War battle fields make use of the antique printing processes in interesting ways.  They look 'authentic', although they differ from the old photographs familiar, for example, from Ken Burns' series The Civil War, in being empty of people.  Dark skies appear almost molten, an expressionist effect resulting from the liquid nature of her wet-plate negatives.  A sombre image of a grey landscape crossed by a wooden fence like a low barricade seems to have two huge dark suns.  Another, in which a black tree looms over a field, is pockmarked in a way that resembles shrapnel damage.  Many are blurred, like the vision of wounded soldiers.  Walking these fields, Mann found that ‘physical traces of the struggle remain. I have a lead minié ball, flattened and deformed, that was picked up at Fredericksburg. The sinuous earthworks still weave through the fields, so well preserved that they appear serviceable for the next civil war. In this peculiar place of stilled time, the spirits seemed to drift up in the fog rising from the fields.’
Posted by Plinius at 11:40 am

Always enjoy your posts - this one in particular. 'Blue-sensitive film' would be a great title for a collection of poems ...