I'm not sure how big a bouncy castle has to be before it can be considered landscape architecture, but let's assume that Jeremy Deller's Sacrilege qualifies for a mention on this blog.  I've not seen it myself, but the rest of the family went to investigate yesterday as the inflatable Stonehenge is currently installed here in London, on Hampstead Heath.  Mrs Plinius has never actually been to the real Stonehenge so this was her first experience of it: "smaller than you'd think from a distance but very impressive close up and once you're there it's impossible not to bounce around."  Apparently there were a few guards on the look out for over-zealous jumping  - a small group of moshing hipsters received a whistled warning. It sounds to me like those guards in the Sistine Chapel that call for silence every few minutes.  Fortunately there is more space to move around and perform somersaults on Sacrilege than there is in the Apostolic Palace of the Vatican.  My wife was pleased to see Jeremy Deller actually there, watching young and old enjoying his artwork, and she congratulated him on not suffering the same monumental error that befell Spinal Tap. 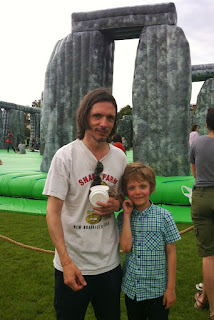 Jeremy Deller and Plinius the Younger 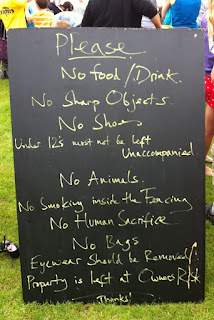 Sacrilege was built for Jeremy Deller by Paul Walkden of Inflatable World Leisure.  The archaeologist/journalist Mike Pitts, who helped build a Foamhenge in 2005 for Channel 4, has written about the project on his blog, Digging Deeper.  They 'replicated the shapes and detailing of the standing sarsens in Nylon PVC, with the textures and lichens painted on by hand. It was damp and overcast when they were there, so the stones’ colours are grey and dark.'  Unsurprisingly, this was very much what the weather was like yesterday and presumably for most days of its national tour.  Early this year there was some controversy over the resemblance between Sacrilege and a 2010 work by Jim Ricks, the Poulnabrone Bouncy Dolmen, a twice-scale replica of the megalithic portal tomb in the Burren; but it all got sorted out amicably.  Perhaps we need more of these structures, hyperreal bouncy simulacra at every prehistoric site, leaving the actual stones to become poetic, overgrown ruins again.  Jeremy Deller is obviously asking questions about the way we convert 'heritage' into interactive fun, but a similar process is going on in art galleries.  I think for his next trick Deller should create an inflatable Spiral Jetty to cheer up all the land art pilgrims turning up now to find a big empty lake and no trace of the submerged sculpture.
Posted by Plinius at 10:02 pm