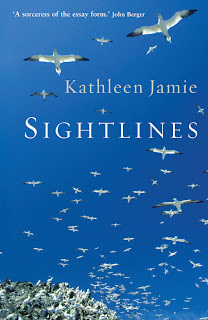 A while ago I mentioned an essay by Kathleen Jamie, 'On Rona', and I've just read an expanded version of it in her new book Sightlines.  Its central incident is now the sighting of a family of killer whales and a breathless chase with her two companions, an archealogist and naturalist, over the clifftops to keep them in view.  This echoes an earlier section in the book where she encounters what seems to have been the same orca family off the coast of Shetland, visible from the shore 'against the wide loose blues of the sea and sky'.  On this previous occasion she was also accompanied by an expert, the birdwatcher and writer Tim Dee, whose views and reactions she weaves into the account - he shares her excitement as they jump over the rocks and tufts of pink thrift in pursuit, coming eventually to the shore, where the killer whales 'entered a broad band of glare far too bright for our human eyes.'  In Dee's book The Running Sky, he describes a similar occasion (there is no mention of anyone else with him), sitting on a clfftop watching the sea when 'suddenly yet dreamily slow, great fins came breaking through the water.'  After walking around the cliff chasing the whales he stops and gazes out again at the sunlit sea when his attention is suddenly caught by 'a tiny earth-brown wren'.  It is a fledgling and perches on him as if he were a stone wall, turning him for a moment into a part of the Shetland landscape.

Landscape and the body are the subject of 'Pathologies', another essay in Sightlines in which Kathleen Jamie visits the pathology lab at Ninewells Hospital in Dundee.  There she is shown a cancerous liver under a microscope 'and for one unused to microscopes it was like slipping into a dream ...  I was looking down from a great height upon a pink countryside, a landscape.  There was an estuary, with a north bank and a south ... "It's like the Tay" I said, "At low tide.  With the sandbanks."  On the southside of this estuary they examine what seems to be a set of old field dykes, 'the marks of a long inhabitation of the land' - healthy tissue.  Then they swing north over the river; 'we stopped and hovered over a different kind of place, densely packed, hugger mugger, all dark dots that semed too busy for comfort' - this was the tumour.  Later, the pathologist gives her a guided tour of an infection, a pastoral scene of bacteria grazing 'like musk ox on tundra.'  On another microscope slide, she has an aerial view of a protozoan, sailing along the coast of the small intestine.  It is, she thinks, 'the nature within.  Nature we'd rather do without.'  Later, heading home, she drives along the same river Tay that she'd fancied she'd seen in the amputated liver cells, but 'the tide was in, no sandbanks.'
Posted by Plinius at 11:33 am

Sweet! i'm definitely going to get my hands on Sightlines, i hope every page of it would be enriched of beauty and greatness of the world that not all of the people can depict in their own words.