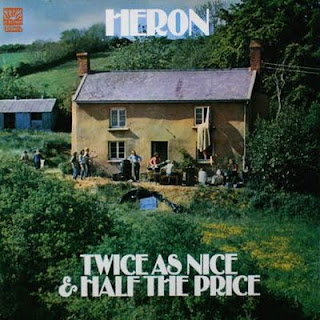 Britain's rural landscape is a constant presence in Rob Young's exploration of visionary folk music, Electric Eden. His prologue follows Vashti Bunyan as she sets out from London in 1968 on the road to Skye, where Donovan was hoping to set up a 'Renaissance Community' of artists (it was the same year that Paul McCartney introduced Linda Eastman to his farm on the Kintyre peninsula).  At the same time groups like the Incredible String Band and Fairport Convention were retreating to cottages and developing psychedelic folk music with a shifting cast of like-minded musicians and artists.  Some of this is familiar history, like the recording of Liege and Lief at Farley Chamberlayne, where Fairport Convention reinvigorated songs from the archives of the English Folk Dance and Song Society whilst recovering from the M1 crash that killed Richard Thomspon's girlfriend and drummer Martin Lamble.  But Young also discusses forgotten groups like Heron, who went to seek inspiration in rural seclusion for their two albums at a farmhouse in Berkshire and a cottage in Devon.  Their lyrics are infused with what Rob Young describes as a 'Wordworthian hippy mood'; 'Lord and Master' for example, 'a reverie sung by a pantheistic nature-god whose being is entwined with the seasonal cycles he describes: 'I am the maker of everything and I soar with the birds in the sky'.'


I have described two examples here recently of recordings made en plein air - Richard Skelton's Landings and Movietone's The Sand and the Stars - but Heron pursued this approach forty years ago, as can be heard from the birdsong at the end of the clip above.  For their first album, the band played their songs outside on a circle of chairs, whilst an additional microphone was set up some distance away to capture the surrounding ambience, as if Nature were a fifth member of the group.  For their follow-up, Twice as Nice & Half the Price (1971), a local RAF base commander was persuaded to suspend flights so that the outdoor recording would not be sullied with the sounds of jet fighters.  Later in the book Young gives another example of outdoor recording from what he calls 'the final bright bloom in the garden of British folk-rock' - John Martyn's One World (1977).  Sitting overlooking the lake on Chris Blackwell's Berkshire estate, Martyn played his guitar through amplifiers floating on the water. 'Time seems arrested; the music is the still centre of a turning world of surging waves and intermittent bird calls.'