The Garden Room at Prima Porta 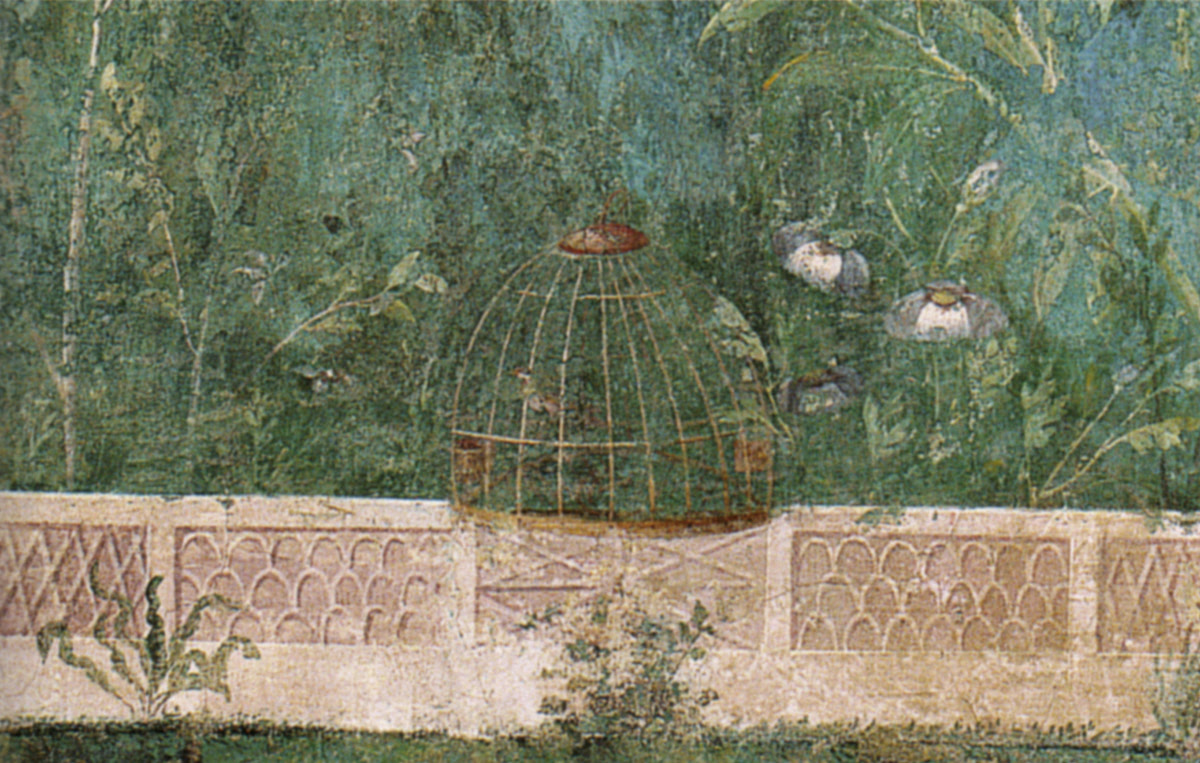 In my recent post about Roman landscape painting I mentioned the 'Garden Room' at Prima Porta, near Rome. In their 2001 OUP survey of classical art, Mary Beard and John Henderson describe this space as 'an impossibly utopian mixture of bright flowers beside laden fruit trees, tidy shrubs before a receding woodland vista, planned garden display within a surround of Italian trees, as if in their natural habitat.'  It is 'an exercise in blue and green. And a celebration of naturalistic technique ... But this is not nature reproduced; instead, a world specially made for us - yet made to do without us. Beyond the balustrade, as no wild birds ever could, these pay not the slightest attention to anyone in the room, impossibly ignoring our proximity. Emblematized by the songbird in its golden cage, art here creates nature, beyond anything you could find in the real world.' 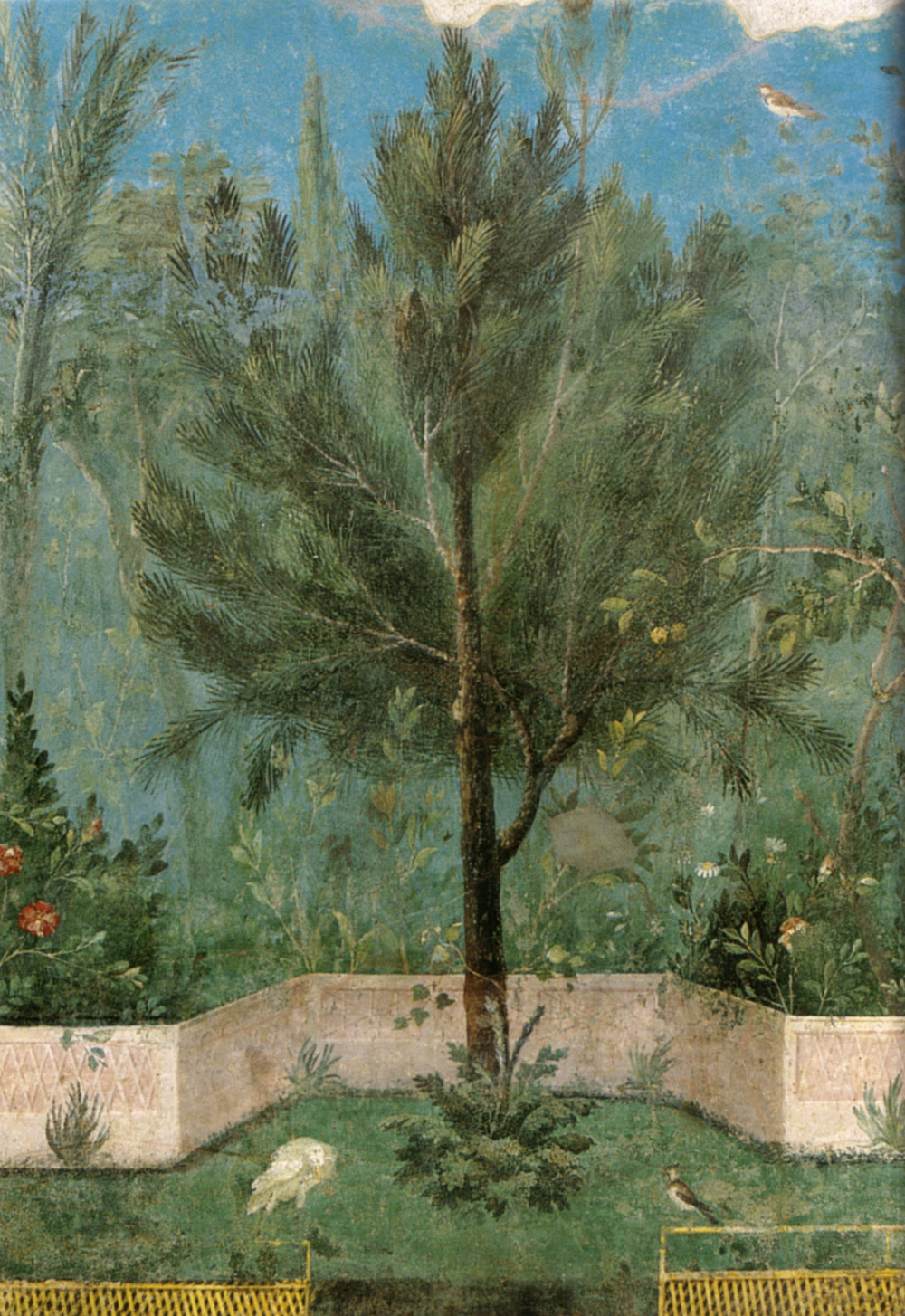 An interesting June 1994 Art Bulletin article by Barbara A. Kellum, 'The Construction of Landscape in Ancient Rome: The Garden Room at the Villa ad Gallinus' describes this painting in the wider context of Augustan Rome, where 'the emperor was quick to establish an arboreal mythology' and the city was punctuated with plants and trees that 'were as protean and mulitvalent in their structures and meanings as the contemporary poetry of Virgil, Horace and Ovid.'  The article's title refers to the villa's ancient name, ad Gallinus; the chicken in question was one which an eagle dropped into Livia's lap, holding a laurel branch in its beak.  This was seen as a good omen for Livia and her new husband Augustus, and they planted the branch, which grew into a laurel grove.  According to Pliny the Elder, subsequent emperors continued the tradition of planting trees in the grove and just before the death of each emperor it was observed that the tree they planted had begun to whither.  Laurel features prominently in the Garden Room, both as trees and low shrubs. 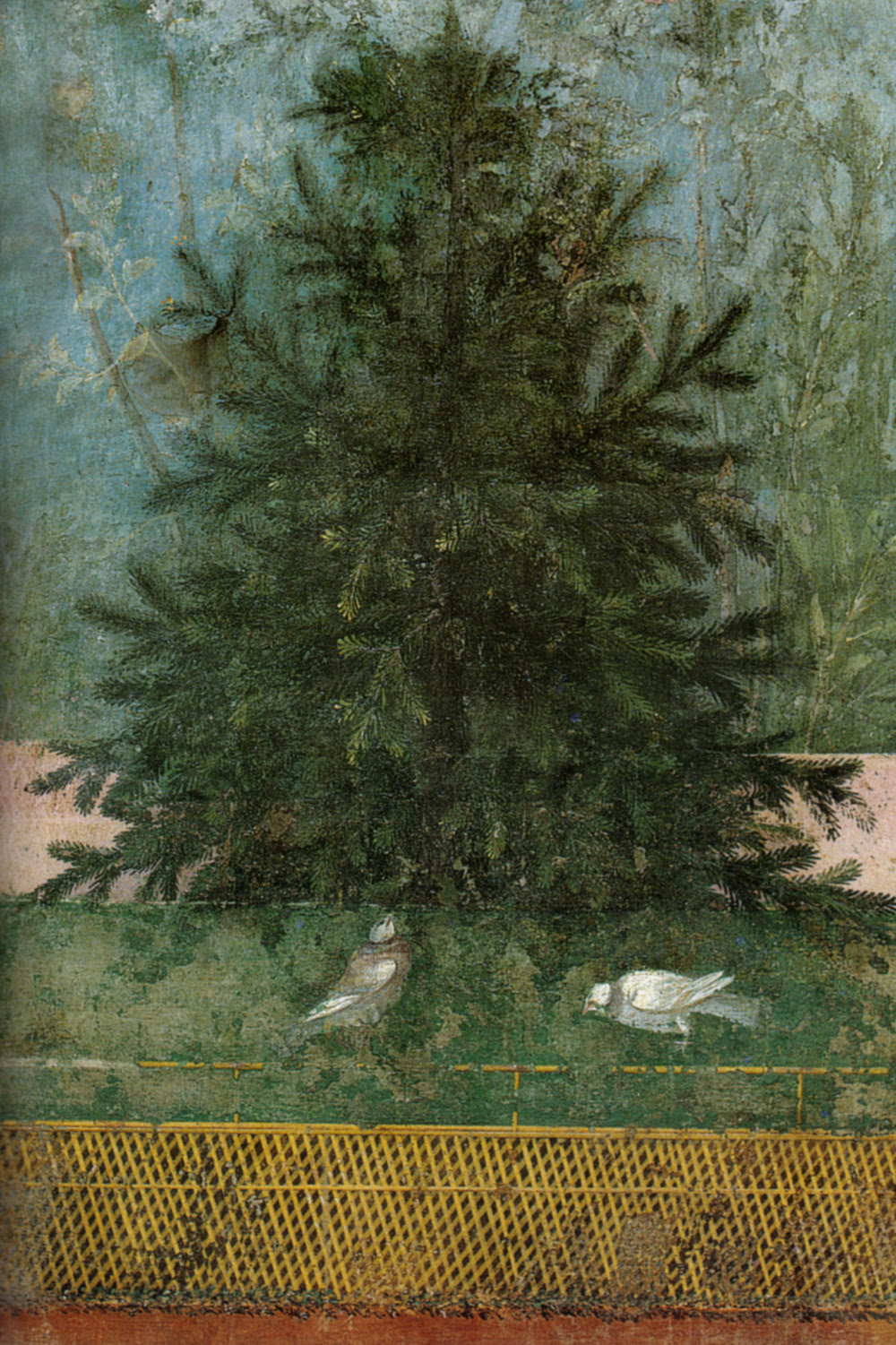 The room is structured around regularly placed oak, pine and spruce trees, but with a profusion of wild plants in between, order and disorder complimenting each other in a way reminiscent of Virgil's Georgics. According to Kellum, this mixture represents on the one hand the fertility and prosperity of the Augustan state, and on the other 'the underlying order that was an essential part of it ... harmonizing the beneficent world of nature and that of the state under a common rule of organic order.'  The individual plants and trees could all of course be associated with symbolic meaning, not to mention the birds.  For example, laurel, pine and cypress trees, nightingales, partridges and magpies all appear in Ovid's Metamorphoses, and the process of metamorphosis itself was, as Ovid knew, central to the mythology of Augustus.  Thus the design of this garden room can be read in terms of the wider symbolic landscape of Augustan Rome.
Posted by Plinius at 9:59 pm