"Goddess with 100ft breasts to rival Angel of the North" was how The Times reported Charles Jencks' plans for Northumberlandia, a vast sculpture and park to be created from land owned by a mining company.  Jencks said, "when finished you will see the most incredible curvaceous woman lying there with her left leg over the right and her hair spread out.”  Melvyn Bragg said tactfully that "the idea of walking over a reclining woman may not appeal to everyone’s tastes."

As the Telegraph reported a few months ago, 'plans for the sculpture, which will be visible from the A1, were originally blocked by Northumberland County Council in 2006 after 2,500 people objected to the proposals.  But after a successful appeal to the Government by the Durham based The Banks Group, which runs the mine, the Goddess will now be able to go ahead.'  The article goes on to say that 'Northumberland County Council was unable to comment, but county councillor Wayne Daley told the BBC the Goddess was "ridiculous". "If we wanted something like this why didn't we just ask Jordan to open a theme park," he said.  "It really is ridiculous to think that something like a naked woman, who is only there as a result of all of the slag and the coal from the mine, is a good way of attracting people to Cramlington."

At the News Post Leader site I read:
'Q) In light of the north east's position near the top of UK league tables for teenage pregnancies and one-night stands, how can Banks justify sanctioning the land-sculpting of a naked pagan goddess, calling it Northumberlandia and claiming it as a "gateway to Northumberland"? (Morag Forsyth, Cramlington).
A) Speaking about the inspiration behind Northumberlandia, Charles Jencks said: "Northumberlandia does not relate to a particular goddess or religion, it is a landscape which incorporates references to the human body towards which we have a natural empathy. The landform can be enjoyed in parts and within many different contexts including the distant landscape, the causeways, lakes and willow islands, and viewing pavilions."'

You can see artist impressions of Northumberlandia at designboom. The conical terraced breasts of Jencks' proposal reminded me of the image of Germania below, one of Martin Warnke's examples of giant figures in his rich and fascinating book, Political Landscape.  In the presence of the all-powerful mother Germania, 'only adulation or death is admissable'.  Giants like Germania represent the state as an active figure, unleashing 'traumas associated with all-consuming power.'  But standing figures can be unstable, as we know from the Colossus of Rhodes, which collapsed after an earthquake.  Warnke quotes the scultpor Ludwig Schwanthaler, whose Bavaria (1837) is another giant personification of place, confidently asserting "no earthquake will cast this down... the Bavaria is the greatest statue ever cast." 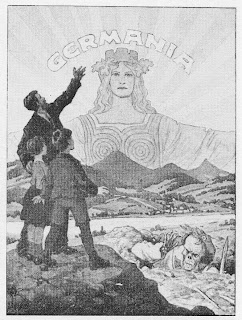 Warnke finds earlier examples of giants in art that took a more horizontal form - passive figures seen lying on their back.  For example, there is the body of a city depicted as a resting giant in the Bizarreries of G. B. Braccelli (1624).  Or Joos de Momper's Head-Landscape (before 1635) over which people are seen happily walking.  Or a profile of the coastline of Brazil, in the travel journal of J. B. Debret (1834), which is 'reminiscent of a dead Christ and so reinforces the impression of paralysed power'.  Northumberlandia resembles these images, and in a region once known for the power of its mining industry, this giant recumbert nude will be another example of a political landscape.
Posted by Plinius at 10:46 pm

I'm reminded of the sad Prélude à l'après-midi d'un faune segment of the animated film Allegro non troppo, where an aged satyr finds he has become too slow to chase the various forms of nymph. He hobbles off into oblivion, not realising that the landscape over which he is walking is itself a vast woman.