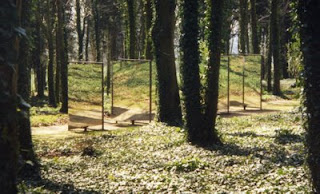 
I took the photograph above at Goodwood Sculpture park a few years ago. The Cass Sculpture Foundation website describes Palova's sculpture thus: 'These five double-sided mirrors rotate around central pivots within their frames. They move in response to the wind or by being pushed or brushed against. The reflections render the form almost invisible when static, but in effect Palova has cut out sections of nature and framed them precisely. The framework remains the same but the pictures change almost continually.' 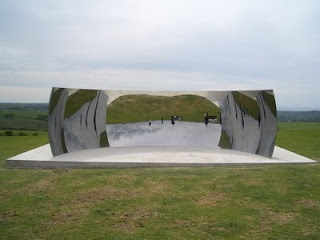 I was reminded of Palova's work when shown a picture of Anish Kapoor's mirror, C-Curve, installed on the South Downs for the Brighton Festival. A relative of mine has noticed the similarity of this piece to optical display mirrors used on flight simulators and expressed concern in an email that "a huge amount of power can be concentrated at the focal point of the mirror – e.g. enough to boil a kettle full of water within seconds!" There don't seem to have been any singed spectators, but I see from the Evening Argus that the mirror itself was cracked by high winds.

This is not the first mirror sculpture Anish Kapoor has installed - his Cloud Gate for example reflects the urban landscape of Chicago. And artist-installed mirrors in the landscape go back at least as far as Robert Smithson's Yucatan Mirror Displacements (1-9) (1969). Here are some other recent examples: