The season of rainy winter

Hesiod's Works and Days is one of the earliest Greek poems we have, which makes it a bit of a shame that the author can come over on first reading as a bit of a bore. As Dorothea Schmidt Wender puts it in the Penguin translation - 'many of us find his conservatism, pessimism, didacticism, misogyny and lack of fun quite uncongenial.' However, she also points out moments of genuine artistry in the poem, as in the contrast he draws between the lives of those who have to work in the harsh North Wind and 'the soft-skinned girl who stays / Indoors at home', able to go 'to an inner room at home' and 'take a nap upon a winter day.' The description of this wind, like other parts of the poem, give a sense of the landscape of Boeotia: 'He blows through Thrace, where horses graze; he blows / On the broad sea and whips it up: the earth / and forest mutter; in the mountain pass / He falls on high-leafed oaks and thick-branched pines / And brings them to the fruitful earth; while all the boundless forests cry...' 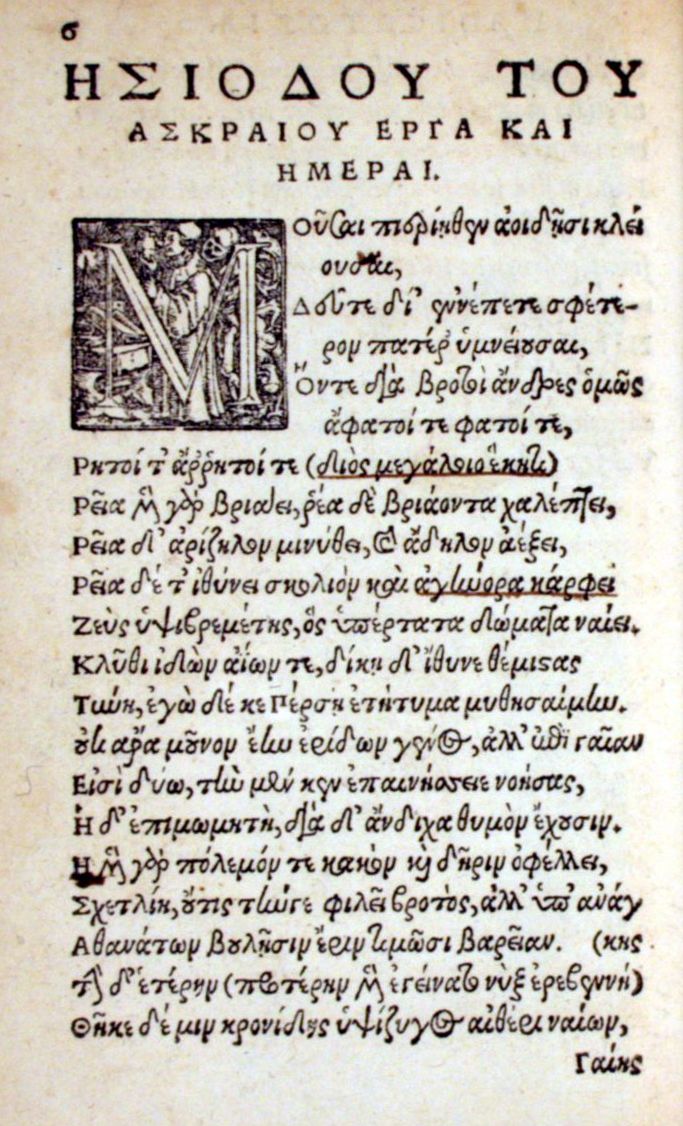 Opening page of a 1539 version of Hesiod's Works and Days

Here is another short extract concerned with ploughing from one of the translations available online: 'Mark, when you hear the voice of the crane who cries year by year from the clouds above, for she gives the signal for ploughing and shows the season of rainy winter; but she vexes the heart of the man who has no oxen. Then is the time to feed up your horned oxen in the byre; for it is easy to say: “Give me a yoke of oxen and a wagon,” and it is easy to refuse: “I have work for my oxen.” The man who is rich in fancy thinks his wagon as good as built already--the fool! he does not know that there are a hundred timbers to a wagon. Take care to lay these up beforehand at home. So soon as the time for ploughing is proclaimed to men, then make haste, you and your slaves alike, in wet and in dry, to plough in the season for ploughing, and bestir yourself early in the morning so that your fields may be full.'

A small bronze sculpture of a plough is one of several works by Georges Braque inspired by Hesiod that was showing at the Royal Academy's exhibition Behind the Mirror: Aimé Maeght and His Artists. The show included Braque's late landscapes which I had seen before but not previously thought of in connection with Works and Days. At the RA they were juxtaposed with Braque's works based on Hesiod and they seem to convey a sense of archaic poetry and reduce the landscape down to its fundamental elements of earth and sky. A couple of them include a plough in the foreground.

The last time I saw paintings like Landscape - Fields with Overcast Sky (1956-7) and Plain I (1955-56) was at the late RA's late Braque show in 1997. A review article by Robert Rosenblum made the comparison with Van Gogh, who 'looms large in a startlingly direct series of Normandy landscapes begun in 1955, a response, perhaps, to the exhibition "Van Gogh et les peintres d'Auvers-sur-Oise," held at the Orangerie in the winter of 1954-55. One of these poignantly simple paintings, Landscape with Dark Sky, is virtually a re-creation of the Dutch master's Wheatfield with Crows, not only in theme and format but in its heavy impasto, a bit of pictorial therapy whose outdoor air and expansive horizon offer a temporary respite from the sequestered visual and emotional intricacies of the studio paintings.'

Back in 1982 John Russell described one of these late landscapes as having 'precisely the pondered look, the rich encrusted texture, and the mingling of real and unreal, poetical and matter-of-fact, that we treasure in late Braque.' These are the qualities we can still read in Hesiod's Works and Days.
Posted by Plinius at 5:04 pm

hi! thanks for your site, it's a great resource and a great topic. Currently I am writing a paper on landscape and I am looking for the image you once had posted in 2006 in a post about Christoforo Sorte, particularly the Map of the Territory of Verona and Vicenza. Do you still have this image? Could you send it to me? troyth@gmail.com

I think early experience with these paintings and their Dust Bowl history is why the plow always seems a slightly sinister object to me.

Troyth - thanks for the comment. I can see the Leonardo links no longer work - sorry. I don't have these images immediately to hand electronically but they should be easy to find in a book on Leonardo. I think the Sorte map link still works though...?

Arcady - thanks I must admit Alexander Hogue is a new name to me...