Last weekend I went to the Small Publishers Book Fair at the atmospheric Conway Hall to see Eugen Gomringer talk about and read some of his concrete poems. While there I bought a couple of intriguing books from Colin Sackett. They both use illustrations from old geography books - charming relics from before the quantitative revolution and rise of critical geography, now recontextualised and given a second life as artist books. In this new form there is a more direct focus on the beauty of patterns and forms in the landscape. The books now raise questions rather than provide explanations, prompting thoughts about place, documentation, text and image, science and art.

The first of these two books is a little version of F. J. Monkhouse's Landscape from the Air, with a selection of aerial photographs featuring British locations. The pages of the original have been shrunk to about 8cm high so that the eye focuses on the images rather than the explanatory text. The white border frames each image and gives them the appearance of the documentary artworks created by people like Robert Smithson and Douglas Huebler. The retrieval and reconfiguring of an old book in this way partly would seem to reflect the 'archival impulse' behind many recent art projects. The images recall a time when British culture, under threat, was preoccupied with ideas of landscape; they are also a reminder of the aerial photographs taken during the war. 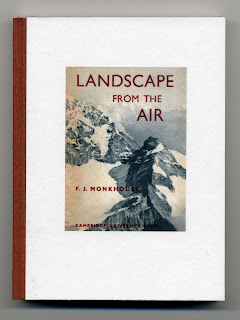 The other book I bought was The True Line, a compilation of drawings by Geoffrey Hutchings. Colin Sackett writes: 'Geoffrey Hutchings published just a handful of books, all addressing the search for geographical and topographical truths, and for the ways of recording and depicting these truths precisely and economically by the handwritten word and line. In addition to his contribution to the development of the teaching of field studies in Britain in the late 1940s, with its emphasis on the direct observation and interpretation of landscape, he achieved a masterly ability to ‘read’ and transcribe a place in a graphic composition—be it a sketch-map or a plan, a tabular profile or a section, or an annotated panoramic drawing. In all of these compositions he integrated line and text in a perfect balance of brevity and detail.'
Posted by Plinius at 7:33 am

As someone who was taught geography at university in the days of the ‘charming relics from before the quantitative revolution and rise of critical geography’ and who was taught by Hutchings’ co-author, S W Wooldridge, I was very interested in your blog. But in those Golden Days before the sterile detour into mathematical geography, we students did not look on the drawings of Hutchings, or indeed Monkhouse’s illustrations to his standard text book, Maps and Diagrams, as anything but ways of demonstrating more clearly the background to geomorphology and geology. They were not seen as works of art. When we explored the Mole Valley from the Field Studies Centre at Juniper Hill, near Box Hill, we used their techniques to map the river terraces and show where the river went underground. But even then I wondered, and I still do, whether the knowledge imparted by these drawings and illustrations really helped one to appreciate the landscape more aesthetically. A nick point might mark the beginning of a subsidiary valley and an anticline might be explain the way in which the scarps and dip slopes were aligned, but did this make them any more beautiful.

However, there were hidden features which did inspire me and still do. Standing in the Surrey Hills, Professor Wooldridge explained that if you poured the contents of a bottle of stout ‘just there’, then half of it would end up in the North Sea and the other half in the English Channel as we were positioned on the watershed. I recall vividly remembering this when I stood with my son on the Rhine/Rhone watershed in Switzerland knowing that water spilt there would end up in the North Sea but also the Mediterranean. When the Prof made his statement, one of the more hearty students remarked that it would have been a waste of stout. I wonder what happened to him?