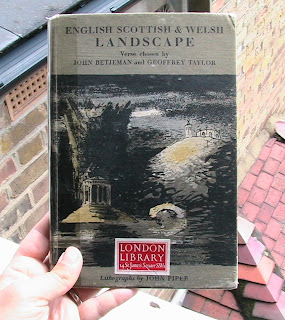 The verse anthology I’m clutching here, English Scottish and Welsh Landscape, edited by John Betjeman and Geoffrey Taylor, with lithographs by John Piper, was published, like Geoffrey Grigson’s The Poet’s Eye during the Second World War. It is a strange book, the product of a unique moment and a particular sensibility. What is so strange about it? Well the whole book begins with an apology rather than a preface in which the editors explain why they seem to have deliberately omitted the most exciting English nature poetry in favour of modest verse written about particular places.

‘You must visualize the earlier part of the book at any rate, as a series of views of this island rendered by oil, water-colour or engraving. Cunningham’s conventional landscapes have been well described by Mr. Grigson in The Romantics as ‘like a cast oil on a dining-room wall in an eighteenth-century mansion – the kind that goes with the house because it is too big for the auctioneer to sell’. The wooden passage from Dodsley is like an inn signboard : Bampfylde is a Morland : Goldsmith is some not very good picture, but so famous that it could not be omitted : Crabbe has the freshness of a Cotman water-colour : many of the lesser-known writers round the turn of the [19th] century are like the copper-engravings or Bewick cuts which, no doubt, adorned some of their works...’

So rather than stick to poems that retain a ‘freshness’, like Crabbe’s, the editors have deliberately chosen a ‘not very good’ Oliver Goldsmith (an extract from ‘The Deserted Village’), a ‘wooden passage’ from Robert Dodsley, and so on. The reason for this approach becomes clear when they describe as ‘the reason for the book’ the chance to include ‘quiet Georgian rectors, village schoolmasters, peers in their libraries looking across the park, Victorian drunks and reformers and escapists’. ‘They were recording landscape from the distant view to the cascade in a wet cart rut, with a love and observation men are just beginning again to appreciate. Theirs may be ‘pedestrian’ verse, but it is written by pedestrians or, at the fastest, travellers on a cob, for pedestrians.’ Even without this explanation, it is clear from a glance at the index of authors that there are a disproportionate number of Reverends: Rev. Henry Alford, Rev. William Barnes, Rev. Robert Blair, Rev. William Lisle Bowles, Rev. Moses Browne etc. And of course George Crabbe was among their number: he was the Rector of Trowbridge.
I was looking for a brief example to include here, but a lot of this poetry is not available on the web (although it was out of copyright when the book was published back in 1944). However, here are a few lines from the book’s opening poem, dating from the start of the eighteenth century. It describes a night scene in Wiltshire viewed (or imagined?!) by Anne Finch, Countess of Winchelsea, in her poem ‘A Nocturnal Reverie’:

...Whilst Salisb'ry stands the Test of every Light,
In perfect Charms, and perfect Virtue bright:
When Odours, which declin'd repelling Day,
Thro' temp'rate Air uninterrupted stray;
When darken'd Groves their softest Shadows wear,
And falling Waters we distinctly hear;
When thro' the Gloom more venerable shows
Some ancient Fabrick, awful in Repose,
While Sunburnt Hills their swarthy Looks conceal,
And swelling Haycocks thicken up the Vale...

‘A Nocturnal Reverie’ is printed next to a John Piper sketch of Pistyll Cain in North Wales – his illustrations are not linked to specific poems: the one below shows the Approach to Gordale Scar. 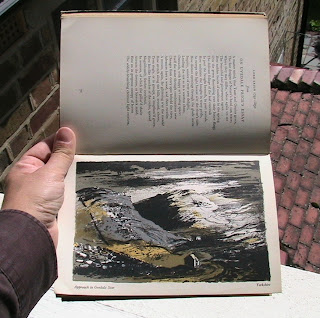 Another biography of Anne Kingsmill Finch, Countess of Winchelsea , on the web ( Encyclopedia Britannica, 11th Ed., Vol. XXVIII, Cambridge: Cambridge University Press, 1910. 702) includes this comment on the standard of her poetry:

‘Lady Winchelsea's poems were almost forgotten when Wordsworth in the "Essay, supplementary to the Preface" of his Poems (1815), drew attention to her nature-poetry, asserting that with the exception of Pope's "Windsor Forest" and her "Nocturnal Reverie," English poetry between Paradise Lost and Thomson's Seasons did not present "a single new image of external nature." Wordsworth sent at Christmas 1819 a MS. of extracts from Lady Winchelsea and other writers to Lady Mary Lowther, and his correspondence with Alexander Dyce contains some minute criticism and appreciation of her poetry.’

This is an interesting blog - which I'll return to.

Would you consider allowing some of it to be reproduced on www.artcornwall.org? Or possibly writing something de novo about the blog and what it means.

We'd be happy to link to it. My e-mail is rupert.white@virgin.net