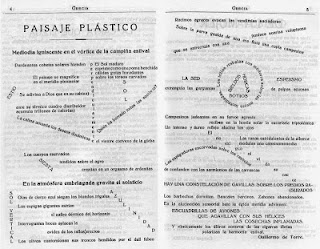 Apollinaire's poem (below) features a building, a tree and a man smoking. The four elements are themselves individual 'calligrammes', but are united in a landscape composition with a simply delineated foreground and background. Torre published his 'Plastic Landscape' in 1919, a year after Apollinaire's posthumous Caligrammes (it is described in Willard Bohn's book The Aesthetics of Visual Poetry, 1914-1928). It is a longer poem than Apollinaire's, depicting the countryside in the heat of midday ('Mediodia igniscente') and ending with a squadron of aeroplanes flying overhead, to somehow harvest the fields of wheat. Only some of the text resembles landscape elements visually - there is a river flowing diagonally through the poem and a curved line of text describing the gleaners, which may relate to the physical action of their work. Much of the rest of Torre's poem uses typography only for visual emphasis, like the words that stand out in capitals: 'SOL', 'SIESTA', 'LA SED' etc. The two works are ostensibly similar but operate on a different balance between word and image: Apollinaire's poem is easier to see on the page, but Torre's landscape is easier to picture in the mind. 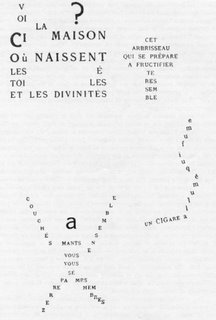