“A Saturday afternoon in November was approaching the time of twilight, and the vast tract of unenclosed wild known as Egdon Heath embrowned itself moment by moment. Overhead the hollow stretch of whitish cloud shutting out the sky was as a tent which had the whole heath for its floor…”

Thus begins Thomas Hardy’s The Return of the Native (1878). In his short 1895 preface to the novel, Hardy wrote “Under the general name of "Egdon Heath," which has been given to the sombre scene of the story, are united or typified heaths of various real names, to the number of at least a dozen; these being virtually one in character and aspect, though their original unity, or partial unity, is now somewhat disguised by intrusive strips and slices brought under the plough with varying degrees of success, or planted to woodland. It is pleasant to dream that some spot in the extensive tract whose southwestern quarter is here described, may be the heath of that traditionary King of Wessex—Lear.” 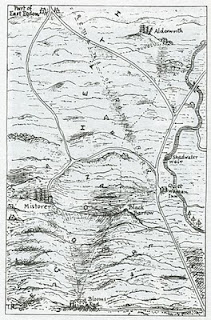 The fictional landscape of Egdon Heath can be experienced in a multitude of ways. There are Hardy’s own descriptions and the sketch map he made in 1878. Hardy’s friend, the photographer Herman Lea, provided a photograph of the fictional landscape as the frontispiece for the 1912 re-issue of The Return of the Native. There are more recent illustrations and media adaptations of the novel (Catherine Zeta-Jones once took the role of Eustacia Vye). One can visit the remains of the real landscape that inspired Hardy (being preserved in the Hardy’s Egdon Heath Project). Or one can turn to works inspired by the idea of Egdon Heath, most obviously Gustav Holst’s 1927 composition.

An Edwin Evans article from 1934 available on-line in the Musical Times archive speculated on why Egdon Heath had not yet then been sufficiently appreciated. “Its chromaticism verges on the atonal – there are many passages to which it is difficult to assign a definite tonality. Yet the effect is not vague in the musical sense. It is the emotion that sets the ear guessing. It is one more frequently expressed by painters. One is reminded of those landscapes which at the first glance present a flat, monochrome surface and come to life gradually as the eye probes into them.”

Of course there are many different recordings of Holst’s Egdon Heath, further multiplying the variations on Hardy’s landscape. The one constant is Holst’s score, the original manuscript version of which might be compared to Hardy’s original sketch map. However, in the article by Evans just quoted, he complains “I have little patience with those who profess inability to arrive at an opinion of a piece of music until they have studied the score. It is the ear, not the eye, that is the arbiter on matters of sound… Musically ‘Egdon Heath’ is not intricate, but its mood is elusive, remote, and an audience that has spent all the hours of the day in the turmoil of modern life is not attuned to it.”
Posted by Plinius at 9:52 am