Hole in the ground

Artist and musician Jem Finer, has been awarded the first PRS Foundation £50,000 New Music Award to create a sound art installation with Stour Valley Arts in King's Wood. The PRS Foundation site has this description: "Inspired by suikinkutsu, water chimes found in the temple gardens of Japan, Score for a Hole in the Ground uses tuned percussive instruments, played by falling water, to create music. A root like system of ducts will collect and amplify the sounds, via a brass horn, rising 20 feet above ground level. Finer describes his project as, ‘both music and an integrated part of the landscape and the forces that operate on it and in it.’" There is a video in which Finer talks about the way the piece will interact with its setting, both as sound and sculpture. Score for a Hole in the Ground will depend "on the cycle of the seasons, the weather and the landscape... the whole piece is played by nature."

The origins of suikinkutsu lay in the realisation by Japanese gardeners that vessels buried upside down under the earth to help drain water away made particularly pleasing sounds.  They became popular in the Edo period associated with the chōzubachi (hand wash basin) used in the tea ceremony.   The visitor would first hear a few drops echoing below, a sound known as ryūsuion, as they began to wash their hands.  This would be followed by another sound, suitekion, as more water fell from the basin.  The simple act of hand washing was thus turned into music.  In the twentieth century suikinkutsu fell out of use and in 1959 only two were known to be still in existence, silent and buried under soil.  However, in the last couple of decades there has been a revival and they are now readily available to buy in metal or unglazed pottery.  Their physical appearance is unimportant because they are never seen: the beauty of the suikinkutsu is that it plays unseen and the location of the sound is a kind of mystery. 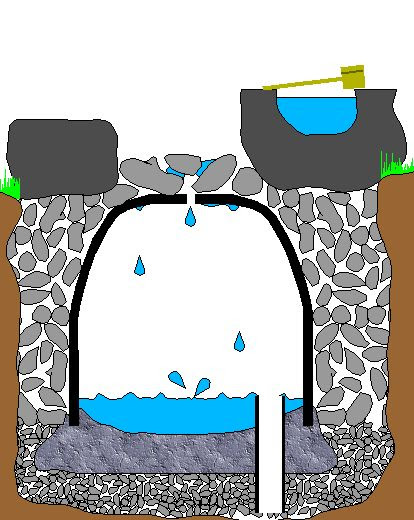 Jem Finer was previously artist in residence at the Oxford University Astrophysics Department and has made an album called Visionary Landscapes.
Posted by Plinius at 5:52 pm