The wind that waves the pines

The Overstory (2018) is the novel about trees that was up for the Booker last year and has now won the Pulitzer Prize.  Clearly it is a very highly regarded novel but I have to admit I found it a slog to get through.  There is a lot of explanation of what we now know about trees and the Wood Wide Web which is very reminiscent of Peter Wohlleben, indeed one of the characters in the novel writes a book that sounds just like The Hidden Life of Trees (Powers has said this particular character is inspired by Suzanne Simard and Diana Beresford-Kroeger).  As for the story itself - I agree with Benjamin Markovits that 'the ordinary diversity that tends to shape plot on a human scale doesn’t get much of a look-in'.  There is an article by Sam Jordison that does a good job of describing the reasons why the novel didn't work for me ('if The Overstory really is one of the best books of the year, then the novel is dying even faster than the forests.')  However, you may well disagree - Powers clearly has lots of admirers - and my purpose on this blog is not really to give positive or negative reviews.

I am mentioning The Overstory here because it deals in a sustained way with trees and forests, although I wouldn't say it has any particularly memorable descriptions of landscape.  I am therefore going to veer off and talk about a poem by Wang Wei that plays an important part in the book. One of the main characters learns that her father, a Chinese immigrant, has committed suicide.  He


'puts a Smith & Wesson 686 with hardwood grips up to his temple and spreads the workings of his infinite being across the flagstones of the backyard. He leaves no note except a calligraphic copy of Wang Wei’s twelve-hundred-year-old poem left unfurled on parchment across the desk in his study:

This poem, 'Answering Magistrate Zhang', can be found translated in many anthologies.  Most of them note that the last line is an allusion to an ancient poem 'Yu fu' ('The Fisherman'), one of The Songs of the South. 'The Fisherman' concerns the banishment of poet Qu Yuan (4th century BCE), which I wrote about here last year. Wandering by a river bank, he encounters a fisherman who tells him that it is wise not to be chained to material circumstances, but move as the world moves.  Qu Yuan wishes to hold himself aloof and pure rather than submit 'to the dirt of others'.  But the fisherman advises him to adapt to the times.  He paddles off, singing as he goes that when the river's waters are clear he can wash his hat-strings in them, and when they are muddy he can wash his feet.  The same song also appears in the Mencius, where the philosopher asks how to deal with a man who is inhumane, and who delights in the things that could lead to his destruction.  It can certainly feel sometimes as if we are dealing with such people in these times, and living in a world where mud is clouding the river waters... 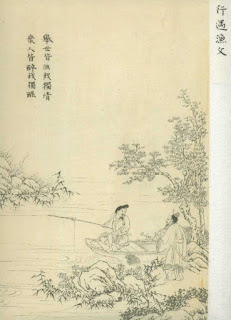 Qu Yuan and the Fisherman
From 'Scenes from the Chu Ci poem Yu Fu' by Bai Yunli
source: Silkqin.com
Posted by Plinius at 11:56 am