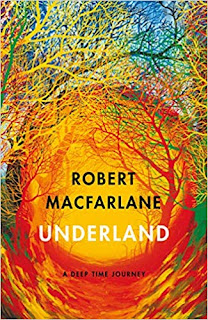 I have started the audiobook of Underland.  I listen to it underground, during my tube journeys to work, where claustrophobia comes from the crush of people rather than the confined space of the tunnels.  It is the first of Robert Macfarlane's books I have listened to and so far the reading is excellent and clear, although there is a point on my daily journey between Highbury and Kings Cross where the scream of the train is so loud that I have to reverse back a little way in order to move forward again.  The fifth chapter, 'Invisible Cities', is particularly resonant to anyone listening on the Underground, as it describes a weekend spent with urban explorers in the world beneath Paris.  At one point Rob is compelled to crawl through a crumbling tunnel which begins to rumble and shake with the passage of a train heading overhead to Montparnasse station.  It wasn't difficult to predict, as I did here a few years ago when Underland was a work in progress, that there would be some 'arduous activity' of this kind in the book.  But there are also rich seams of cultural history, like the pages devoted to Walter Benjamin (including his arduous final walk and memorial.)  And there's Italo Calvino of course: his 'Invisible City' of Eusapia had a copy of itself underground, a dead place that over time became more and more like the 'real city' above.

Cities are increasingly vertical - it has been estimated that the infrastructure supporting urban life spans from 10,000m below sea level to 35,000 km above it.  But one day they will be gone. Then


'it is the invisible cities - the undercities - that will be preserved most cleanly, embedded as they already are within bedrock.  The above-ground structures we have built will collapse to form jumbled urban strata: medleys of concrete, brick and asphalt, glass compressed to a milky crystalline solid, steel dissolved to leave trace impressions of its presence.  Below ground, though, the subways and the sewerage systems, the catacombs and the quarry voids - these may preserve their integrity far into a post-human future.'

Listening to this, I imagined our tube train preserved intact within the fossil record, along with other machines and artifacts that have been abandoned or buried underground.  In an earlier chapter, Rob is told that potash mining machines are simply left when they come to the end of their lifespan.  In their caves they will gradually be covered in translucent halite, burial shrouds of salt.  Another striking Ballardian image occurs in 'Invisible Cities', when Rob remembers a trip he made to a slate mine with the writer and urban explorer Bradley Garrett.  There, in a great flooded chamber, a shaft of sunlight illuminates an avalanche of abandoned vehicles. The oldest cars were the furthest down - at its base, 'a blue Cortina estate was poised as perfectly as a glacial erratic atop the moraine, with a moss-green Triumph Herald both its pivot and its point of repose.'

Guardian readers may recall a 2013 article Rob wrote about urban exploration, describing his first excursion with Bradley Garrett.  Some of this material reappears in Underland and encountering it again made me wonder about the tube journey I was taking - who else might have passed through those tunnels during the night?  Towards the end of his 'place-hacking' day in London, Rob was worried he might miss his half-midnight train from King's Cross.


'"We'll get you there," replied Garrett. "In fact, if you want we'll walk you north up the tunnels, and pop you out of a manhole just by the station." I liked the thought of taking the tube rather than the Tube back to King's Cross. But I pitied whoever sat next to me on the way home.

Comments are moderated because even with these filters spam is more common than non-spam. Your comment therefore won't appear immediately. Sorry for the inconvenience - genuine comments are really welcome.